Elsewhere in this section we did a shadowbox frame for our client and his wife when they went to New York and took in the Broadway show, Mama Mia! They liked the first one we did so much that, when they went back to NYC again, they took in two shows while there and sent us the Playbill and tickets for Sister Act and Wicked, upon which we were to work our framing magic.

They indicated that they wanted them to be a little smaller than the first one, since they were planning on making a whole wall full of them. We wanted them to look a little different this time, too, so we searched online for a photograph of Broadway at night that might have the signage or marquee for one of these musicals in the picture. As luck would have it, we found one that had a large, lit-up billboard in the foreground for Wicked, so we bought two of them. They were sized 12 x 16, so that made the sizing problem a lot easier. 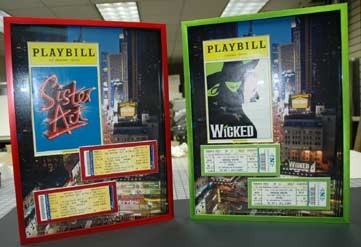 We mounted each one on a sheet of Crescent Brite-Core Yellow with a black surface and cut an opening in it to create a sink mat that would contain the entire playbill. A sink mat creates a deep pocket that will contain a thicker flat object without having to cut it apart. When the opening was cut in the surface of the mounted photo, the Playbill was outlined in the same yellow as they used on the Playbill's masthead. We used the same mat for both shows.

To differentiate the two, however, we mounted the tickets on pieces of mat board that color-coordinated with the main colors on the Playbills (red for Sister Act and lime green for Wicked ). We found some very intensely colored fabric covered mats that worked well for both.We had to strip away some of the fabric under the tickets, however, to get them to stick properly. The mounted tickets were then attached to recessed, 1/4" thick pedestals that could not be seen. They gave the impression of the tickets floating over the photograph. For Sister Act, we positioned the tickets to cover up the Wicked billboard in the foreground.

The frames were Nielsen Vivids, custom cut for the projects. The Vivids collection are aluminum frames brushed with an "X" pattern in them and painted with a transparent colored lacquer. They also offer them in purple, yellow,orange, 2 shades of blue, magenta, a deep green and others. They were perfect for this project. 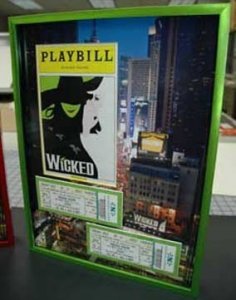 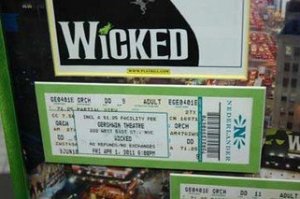 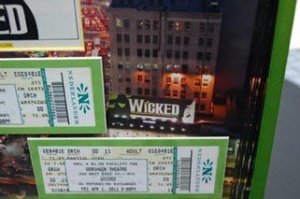 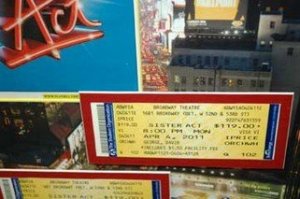 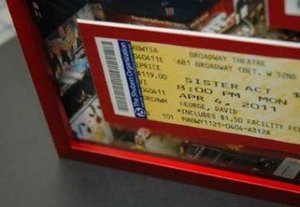 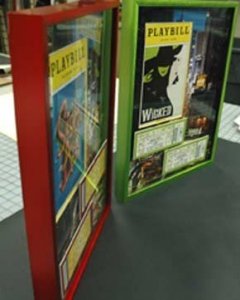