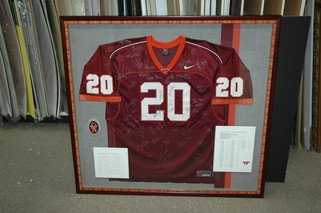 Our client played football at Virginia Tech when he was a student there and his team went on to play in the FedEx Orange Bowl in 2007, in which he participated. His jersey is signed by all his teammate, and the overall presentation is very striking. The whole project was designed and executed by our shop manager, Dana Fisher. One of the challenges she had was that there were two documents the client wanted included that he only had on a computer disk. We didn't have a color printer on which to output them, so we went over to FedEx/Kinko's and had them output in their full color format (black, white and orange) on a heavy, glossy white paper stock. We have, since that time, partnered with a nearby print shop (C&L Printing) who does great work for us.

Another challenge was that the inside size of the shadowbox was 38 x 41 and the matboard Dana wanted to use was not available oversize (i.e. anything over 32" x 40" is considered oversize). To make it work, she spliced-in two stripes of color that coordinated with the VT colors (B4837 Burgundy Silk by Bainbridge and C9581 Hot Sauce Orange by Crescent). This gave her a mat board large enough to use as a backdrop. The primary background was Artique A4838 Grey Fell (a subtle stone pattern). Splicing is accomplished by cutting bevels that underlap or overlap the bevels between adjacent mat boards, not just butting them up against each other with square cut edges. That way, you do not see a white line where one board color ends and another starts.

The frame is a pair of stacked mouldings, with Studio Moulding's "Elan" series in Mahogany (#242-134) on the outside and Guerrini GI280-CN-BDR Cherry Wood on the inside (the VT colors!). The frame is lined with grey mat board to create the box strips that hold the Conservation Clear U/V filtering glass in place.

The two documents are mounted on 8 ply rag mat board with an outside bevel cut all around. The shoulder patch is mounted on a piece of the grey mat board cut as an oval. All three items have a recessed riser underneath to give the appearance of them floating over the composition. 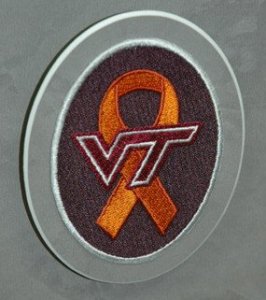 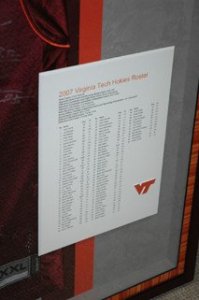 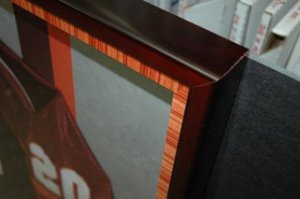 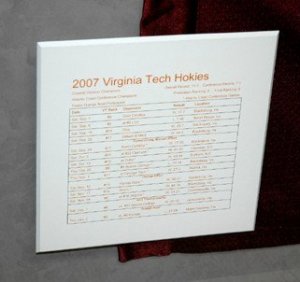