USO Framed Print with "We Salute You" Plaque


We got a phone call from one of the ladies at the USO, the service organization that looks after our military personnel when they are on leave in an unfamiliar city. She said that they needed to frame and present a signed, Alex Ross print with an engraved plate that was being presented to General Ray Odierno, out-going Commander of U.S. Joint Forces Command in Iraq. We only had a few days to do this, so our shop manager, Dana, kicked into high gear and designed a beautiful framing treatment for the print.

For those of you unfamiliar to the world of comic books, Alex Ross is noted for his drawings for Superman, Batman and many other super heroes. He has a very realistic, distinctive style that went perfectly with the subject matter in this print: Members of the service saluting with the U.S. Flag in the background. He is also a graduate of the American Academy of Art here in Chicago).

The mat is a Khaki Linen with a "V" groove cut all the way around the mat opening, terminating at the keyhole into which the brass inscription plate has been inlaid. The frame, by Larson-Juhl, is Ebonized Walnut in their Cranbrook collection. It has a flat face and an angular, undercut back edge. The whole package looks very masculine and striking.

All copyrights to the framed image depicted here belong to Alex Ross and the image is reproduced here solely for informational purposes. 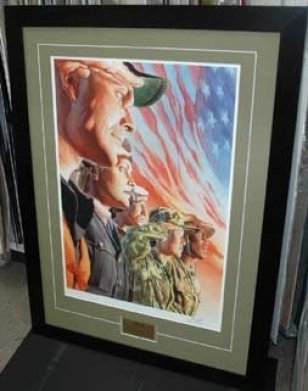 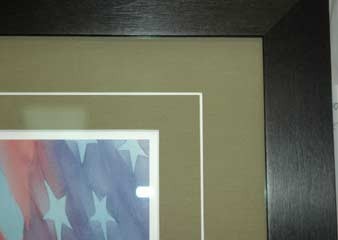 The whole composition is surrounded by a "V" groove cut into the face of the mat about 1" out from the main opening. 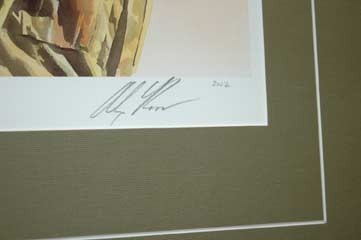 The mat opening pulls away from the image to show the artist's signature. 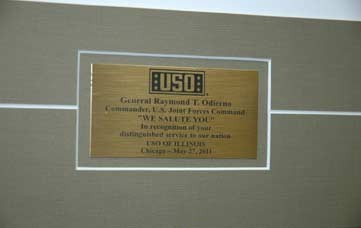 The plate is inlaid into a "keyhole" mat opening about 1/8-3/16" larger than the plate all around.