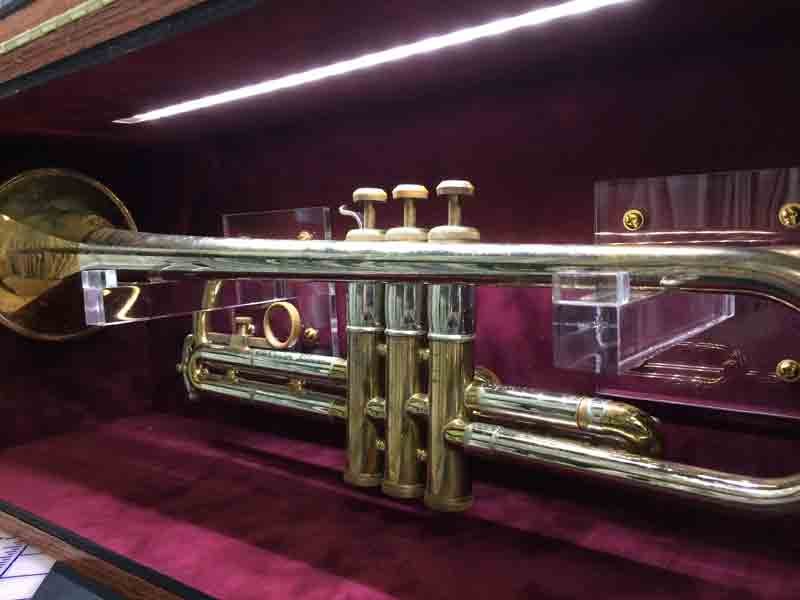 In mid-2017, a gentleman from out east contacted us about doing another Trumpet shadowbox in a similar design to the black one shown elsewhere in this section of The Framescape Gallery. He had a trumpet that belonged to his father that he wanted to display up on the wall of his home and wanted access to it from time to time. He had two, fundamentally, different requirements from the previous one that we had done, however. First, instead of matte black wood, he wanted it done in Red Oak and he wanted it stained a particular shade. Second, he wanted to know if we could outfit the interior with lighting that he could turn on and off at will. 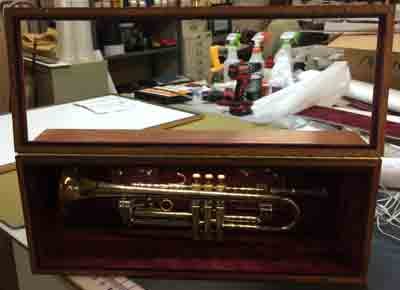 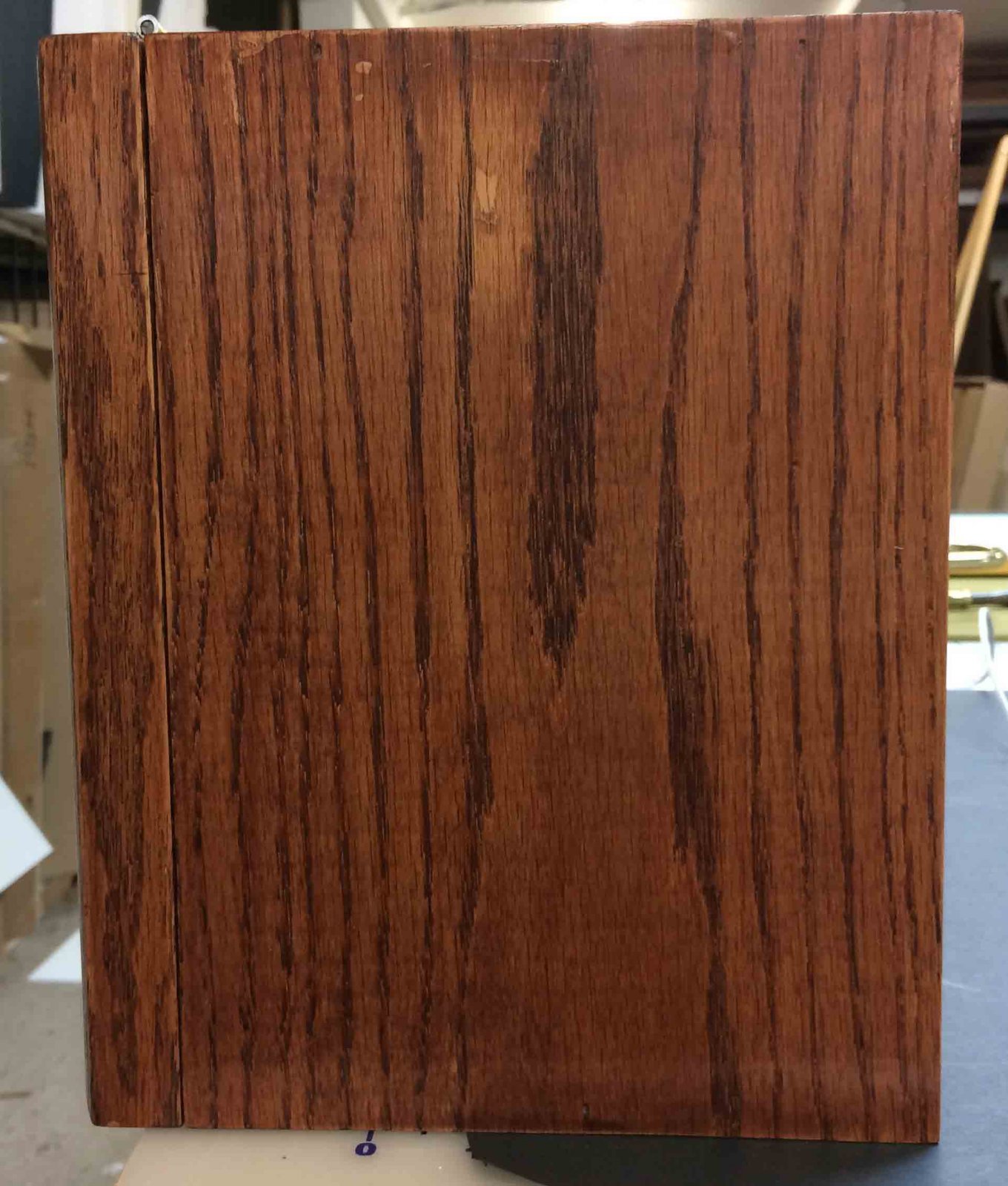 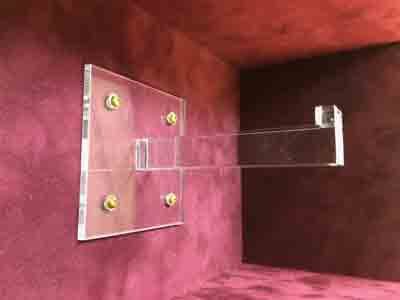 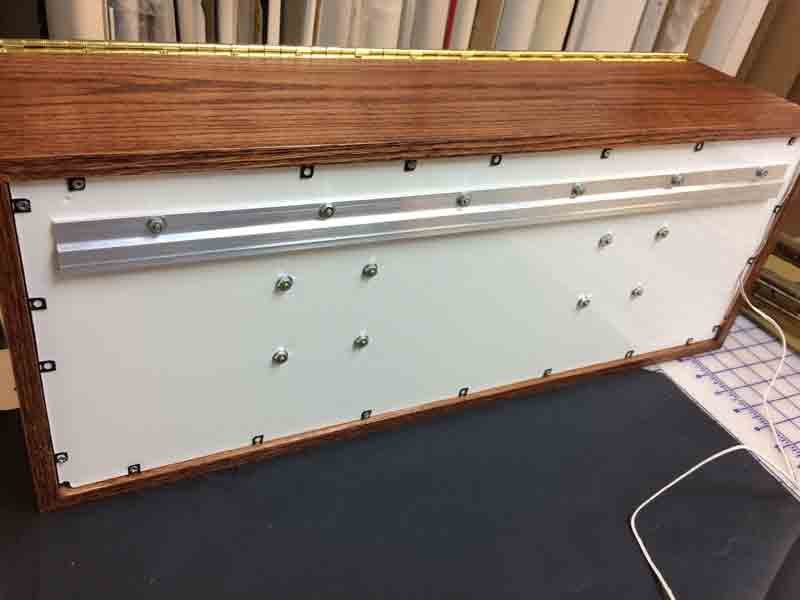 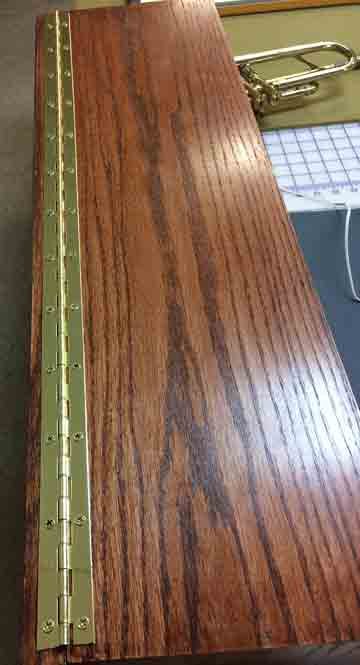 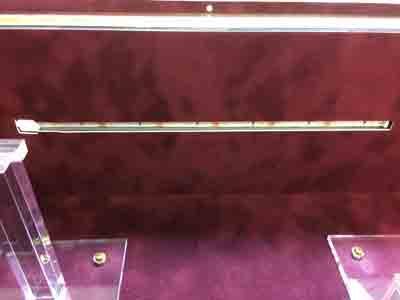 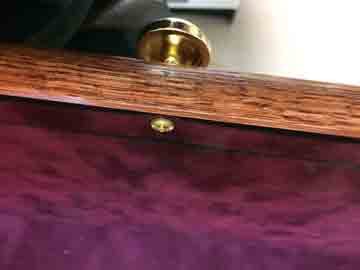 Because of the depth of the shadowbox, we were either going to have to order two frames for the body, rip the lip off of one of them and glue them together, leaving a seam visible to create a body deep enough to hold the trumpet or find a vendor who could custom mill and chop to size some Red Oak planks. Vermont Hardwoods, one of our suppliers of exclusively American frame mouldings, said it would not be a problem. So, we had them mill and chop red oak planks about 6" wide by the required length and height. They were not inexpensive!

We also ordered the front lid made from the same Red Oak in a moulding profile they already had in stock. We attached that to the top of the main frame body with a full length brass piano hinge (see photo). We added a solid brass knob  with a countersunk bolt to help open and close the lid. The lid was outfitted with Tru-Vue Anti-reflective glass. The back of the main frame housing was covered by a rectangular panel of Alumalite, an aluminum and corrugated plastic composite. One photo shows the back of that panel with the bolts and nuts holding on the acrylic trumpet brackets that we had fabricated, along with the Multi-points that held it in place but could be bent outwards to remove the panel if necessary. You can also see the power cord wires coming out the back corner.

Engineering the lighting took some doing. We were concerned with heat buildup from conventional lighting and determined, therefore, to use LED strip lighting. We bought an LED lighting kit at Home Depot and it was just what we needed. It had an LED lighting strip that could be cut to the desired length. We lined the inside of the shadowbox with a burgundy suede matboard adhered to all black foam board. The LED strip was inlaid into a slot cut in the matboard/foamboard liner on the very underside of the top of the shadowbox, so the light would shine down onto the trumpet. We silicone-glued the main top and bottom panels in place, first and then did the same for the side panels, making sure the wires were inserted through the back panel first. The back panel was the Alumalite rectangle, with he burgundy suede attached to its face inside the shadowbox. The power switch was in-line on the power cord coming out of the back of the frame. The transformer was at the end of the power cord nearest the plug that goes into the wall outlet.

We figured out where the custom made acrylic brackets had to go and then bolted them on using brass bolts visible inside the frame and regular nuts on the outside, rear. One other neat trick we used was to inlay small, round, rare-earth magnets into the bottom, inside face of the front glazed lid and a pair of magnets into the opposing edge of the shadowbox along the bottom. That way, the lid would not, accidentally, flop open if bumped into or if the trumpet was not placed onto the brackets correctly. We used Forstner wood bits to cut the countersunk holes in the lid and frame and epoxied them in place.

In the end, the project cost the client a little over $1200, but it looked amazing and well worth it. As a post script, about a year later, the client contacted us about the frame. It was going to need repairs on the LED strip, since he had asked some "electrician" to shorten the power cord coming out of the back of the frame and the guy had shorted the whole thing out. Our client shipped it back to us and we had to tear out the top suede mat/foam board panel and completely replace the LED strip and wiring. That cost extra. So, if you order one of these, think it through carefully so that you can tell us, up front, how long the power cord needs to be.

We welcome inquiries about custom shadowboxes like this for instruments or any other 3-D object that you want to see and, periodically, fondle.