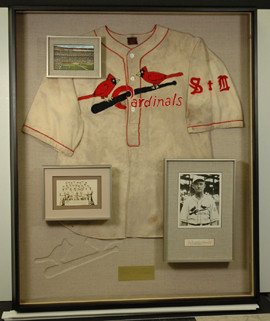 Our client had the good fortune to be the grandson of a Major League Baseball Hall of Frame team manager, and inherited a treasure trove of baseball memorabilia. One item, in particular, was tons of fun to frame. This was the Manager's Jersey for the 1928 St. Louis Cardinals. It was the jersey he wore while managing them at a World Series Championship that year, cigarette burns and all. Unfortunately, the Cardinals lost 4-0 against the Yankees in that series.

Also included in the shadowbox frame were some sub-frames. That is, small, framed items with Museum Glass on them were attached to bent acrylic stalks that allowed them to hover out over the sewn-down uniform. These had to be fabricated from acrylic rod and sheet, bent with a heat gun and attached to both the fabric -covered mat board upon which the jersey was sewn as well as to the small sub-frame. The sub-frames contained an autographed picture of the manager, Bill McKechnie, the stadium the Cardinals played in, and a team photo. Other elements included a brass plate surface mounted at the bottom of the package as well as a de-bossed, fabric-covered Cardinals logo in the lower left corner below the jersey. It was cut out using the Wizard's Path Trace program (the Wizard is our computer-driven, automated mat cutting machine). This involved tracing the whole logo and allowing the cutter to cut out the logo in the mat, then covering it with fabric and pushing the fabric down into the opening or "debossing" the image.

The frame depth needed required that we join two frames together. This was accomplished by means of a table saw and some traditional joinery techniques. Development and execution time for this project was about 4 to 5 months, as we had to use a lot of tools and techniques we had never before attempted. The whole frame job was designed and built by our frame shop manager, Dana Fisher. It was a great learning experience and the end result was well worth the effort.

As a post script: We learned, a number of years later, that the entire collection of memorabilia had been put up for auction and the jersey was removed from the frame. We don't blame the owner: they got a ton of money at that auction. However, this only validates the fact that, when doing preservation framing, we never attach an object within a frame that cannot be unattached if it has any value. 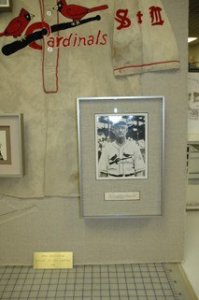 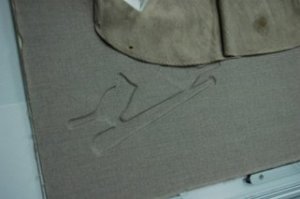 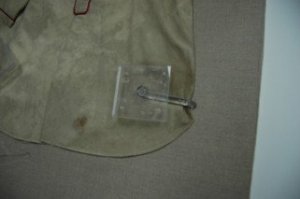 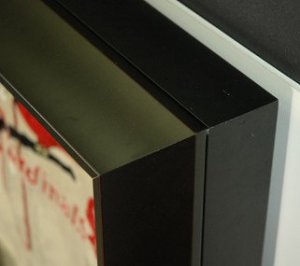