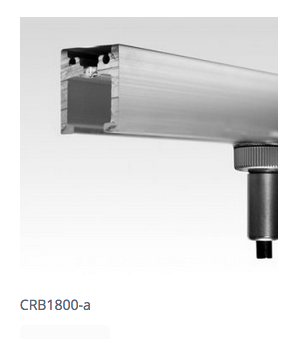 For those who need to hang their frames from a ceiling-mounted rail and not a wall mount, there are the Arakawa CRB1800-a and CRC1800-a rails. The CRB attaches to the face of an existing ceiling and only comes in a 72" length. It can easily be cut with a miter saw or a metal hacksaw to the required length and there are no pre-drilled mounting holes in case you want to try to screw into the ceiling studs rather than just the ceiling drywall panel. The CRC rail looks similar to the CRB, but it has a peeled-outward lip that overlaps the channel cut in the ceiling drywall so that it mounts flush with the front face of the ceiling. This is helpful during new construction, before the drywall is attached to the ceiling joists. It can, also, be inset into vertical walls if you wish to employ a right-angled tensioner (called a BS23DRSET) or inset into the floor for use with a bottom tensioner called a BS23BRSET. This is helpful for items hung on walls where there is a lot of foot traffic passing by that may brush against the hanging items.