Flax offers Shadowbox framing of all types. Shadowbox framing is employed when the object being framed is three-dimensional, or is a flat object that requires platform mounting to give it a deep, box-like framing treatment. We have hundreds of frame mouldings that are deep enough to achieve this.

What sort of things do we Shadowbox frame? For example, we created a deep shadowbox frame of a Baseball Hall of Fame manager from the early 20th century. It contained his original 1928 jersey, photographs of him, the teams he managed and the stadium his team played in during the World Series. We’ve shadowbox framed christening dresses, bulletproof vests, cast bronze plaques, maps with travel photos on platforms of varying heights, antique spoons, books, coins, military decorations, even a family heirloom branding iron! If it’s important to you and it can fit in a frame, we can put it there in style!

In conjunction with Shadowbox framing, we frame a lot of sports jerseys, textiles and tapestries. Most often they are done in standard shadowbox-depth frames. Other times we can have a plexiglass box made to cover the textile, sewing it down onto a fabric-covered strainer back. For more examples of shadowbox framing, check out our Framescape Gallery section of the website. You will also find shadowboxes scattered throughout every section of the gallery. 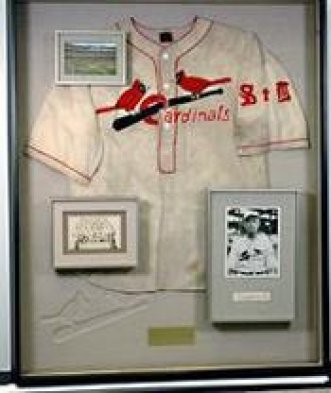 A SHORT PRIMER ON SHADOWBOXES

Just what constitutes a shadowbox frame? If you look at the photo of most shadowbox frames, you can see the inner, vertical face or edge of the picture frame, covered in what we call "box strips." These are strips of mat board, backed with 1/8" foam board that create a thick ledge, against which the main platform containing the 3-D art can rest. The box strips also hold the glass in place up against the lip of the frame. Usually, the box strips are covered in the same mat board as the main art platform. It gives it a nice, finished look.

How deep can a shadowbox frame be? Usually, a frame that is 1 to 2" or deep can be used as an effective shadowbox. Just putting glass spacers under the glass to keep the glass off the art is really not a shadowbox. A shadowbox needs to have the box strips on the edge, in most cases, to qualify. We have mouldings 4 to 5"deep as well as some less expensively made, modular shadowbox mouldings that are stackable to customize your frame depth. If your object is taller or deeper than that, you may consider putting it in a plexiglass frame box instead of a traditional shadowbox.

What's a plexiglass frame box? A plexi box, as we call it, is constructed from plexiglass or 1/8" clear acrylic sheet and is open on one side, into which is inserted a platform, usually made from wood and covered in fabric on the front and vertical sides. It is held in place by countersunk screws through holes drilled in the edges of the box. You can mount art onto the fabric surface and be able to see it from nearly any angle, whereas in a traditional shadowbox frame, you can only view the art from the front through the glazing. There is a separate section in the Framescape Gallery that covers plexi boxes.

How much does it cost to shadowbox a sports jersey, for example? Frankly speaking, big shadowboxes are not inexpensive. Not only do we have to use a lot of material to build and glaze the frame, but there is a lot of hand sewing and fitting that goes into showcasing your jersey correctly. Football and Hockey jerseys are large, even with the sleeves folded in somewhat. Baseball jerseys are a little smaller and basketball, biking and soccer jerseys have the smallest footprint. Depending upon the materials selected for the shadowbox and its lining, you can expect to pay anywhere from $600 to $1200 for a typical jersey shadowbox. When it comes to price, size does matter. We do have some 30 x 40 ready-made frames that can be used for some jerseys, that could bring the cost down a bit.

Can you do a jersey shadowbox quickly? While our first impulse is to say, " No", it really depends upon what "quickly" means. We usually need at least 3 to 4 weeks for jersey shadowboxes. However, we have done them on a rush basis within a few days for a big up-charge. It means that all the other clients who have patiently waited 2 to 3 weeks for their jobs must wait a little longer so that we can accommodate your request. Expect to pay handsomely for the privilege.

IF YOU HAVE MORE QUESTIONS ABOUT SHADOWBOXES OR NEED A PRICE QUOTE, CONTACT US AND WE'LL GET BACK TO YOU RIGHT AWAY!

Click on the links below to view and read about these shadowbox projects we created: