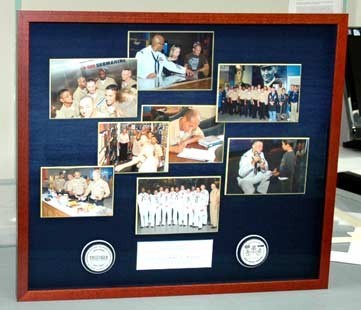 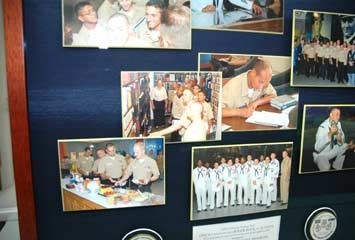 The USO of Illinois, in conjunction with the Pritzker Military Museum in downtown Chicago, presented two of these shadowbox collage frames to members of the U.S. Navy for their part in the historic renovation of the U-505 German, WWII submarine that is on display at the Chicago Museum of Science and Industry. It needed a lot of restoration work and the museum created a whole new indoor space for the sub to protect it, restored it to its original condition with the help of the U.S. Navy and others.

The shadowbox is a Gemini 2934 flat-top mahogany wood frame, with a Bainbridge 4836 Imperial blue sueded mat as the basic platform for all the mounted pictures and comemmorative coins. As you can see, many of the photos overlap each other and can do so because the collage was designed with 3 different height risers to allow this. It adds variety and interest to the composition and lets you put more in than you might have otherwise. The platforms upon which the photos are mounted are Crescent Brite-Core mat board with a yellow core, which gets exposed on the edge of the photo when we cut it at a 45 degree bevel.

The two commemorative medallions on the bottom are the front and back side of each, mounted on a disc-shaped matboard platform. The message is laserprinted and appears in a keyhole mat opening at the bottom between the discs. Glass used is Tru-Vue AR anti-reflective glass.

Images by kind permission of Allison Ruble of the USO of Illinois. 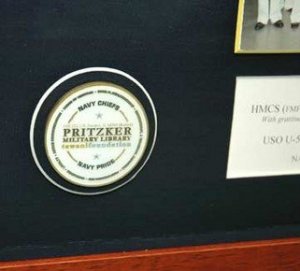 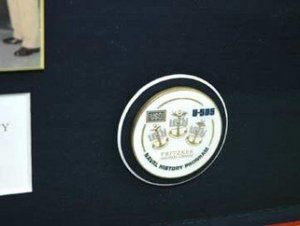 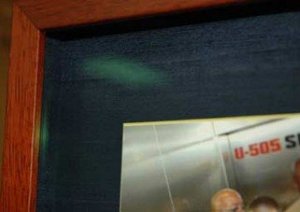