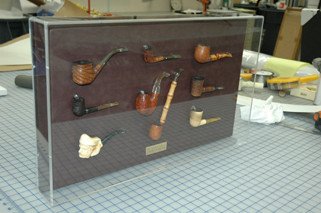 Just before Christmas, a client came in with a bag full of pipes that had belonged to his late father-in-law, which had great sentimental value for his wife. He wanted them framed in a shadowbox presentation or some way that would let him display them on a wall in their home.

Because a tradtiional shadowbox only allows you to view objects from the front, we thought it would look better in a plexiglass box or plexi-box, where you could view the pipes from different angles. We had one built with rounded edges and a 1" deep strainer back that we covered in a Crescent Moorman Library Leather mat board. In fact, we had to strip the leather surface material off the mat board in order to cover the mounting base for the pipes.

Our plexi-box, from Showcase Acrylics, was made with rounded edges and a 1" deep strainer back. Each pipe was, initially, held in place with a small lump of UHU-TAC, an adhesive putty that doesn't harm the object. The pipes were all secured with a variety of methods, using nylon fishing line to lash them down, along with acrylic "Mighty Mounts" to secure the stems and pipe bowls.

Once the pipes were all secured and an engraved plate was attached to the face of the display, a plexi box was lowered over it and held in place along the edge by means of countersunk screws through holes in the bottom edge of the plexi box. We used a short "Z-Bar" french cleat to provide a means of hanging the box on the wall (see photos for detail).

In designing the layout of the pipes, we consulted with the client first, who told us his preference for what should go where, and then we fine tuned it to create a layout that addressed all his issues. We even took a photo of the layout before removing the pipes from the sales counter to remember what went where per the client's preference. While very time consuming to finish, the end result was very satisfying. Nearly any collection can be artfully framed if you put some careful thought into the design.

Click on the photos below to enlarge them a bit for better viewing.

Got a collection of objects that you're fond of? Want to see them up on the wall instead of inside the cigar box in the desk? Bring them in and let us work our magic on them! 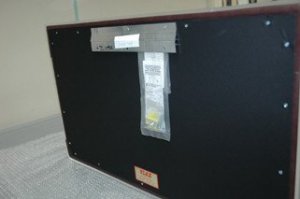 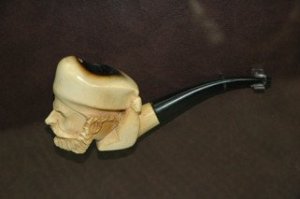 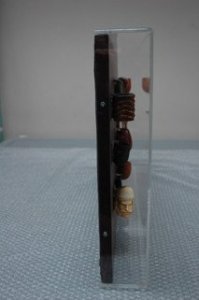 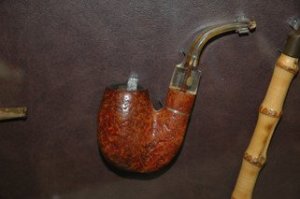