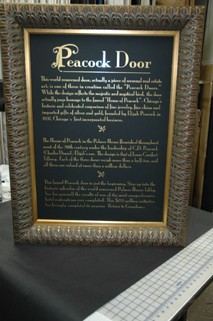 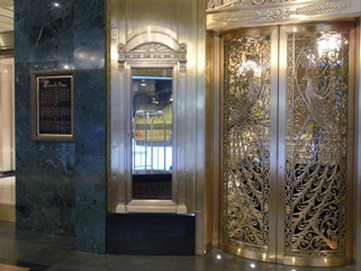 Our store is just around the corner from one of Chicago's oldest and finest hotels, The Palmer House Hilton. The first Palmer House was built by Potter Palmer, the founder of Marshall Field's & Co. department store, who eventually sold it to one of his junior partners, Marshall Field I. Palmer decided to build a prime hotel just down the block from his department store and put up a beautiful, all wood hotel as a present to his wife, Bertha (a great patroness of the arts in this town), which was completed in 1871. It was finished just before the Great Chicago Fire of 1871 and it burned to the ground. Determined to rebuild, he constructed the first "fireproof" hotel in Chicago on the same site. It still exists today. In 1926, the hotel put up after the fire was torn down and the current version was built. It underwent renovations in the mid 1970's and again, recently, has undergone a superb renovation and updating. Outside the hotel at the corner of State and Monroe is the site of Chicago's first and oldest jeweler, C.D. Peacock. Inside the lobby, a matching set of doors were built as well. These doors, as you can see by the picture, are massive, bronze doors in the shape of Peacocks. These were designed and built by Louis Comfort Tiffany.

Ken Price, the Palmer House's Director of Public Affairs, comissioned some signage to tell the story of these doors for inside the hotel lobby. Ken wrote the copy and Red Bird Sign Studio did the signage, but needed some spectacular frames to go around them. That is where we came in. We showed them some massive gold wood frames from Omega that are covered in a pattern that looks like Peacock feathers.

In addition, we added a gilded wood "slip" or flat frame that fits inside the inner lip of the main frame.The slip extended the lip of the frame and gave more emphasis to the signage it contained. Anti-reflective glass was used to make the signage more readable. Two of these now hang permanently in the lobby.

Photos displayed by kind permission of The Palmer House Hilton.

Click on the images below to enlarge for viewing: 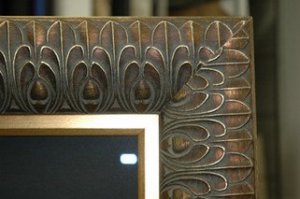 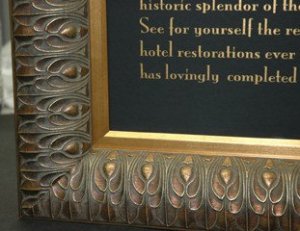 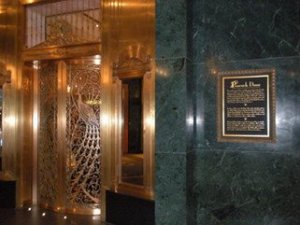