As evidenced by the events in Spain from a few years back, where an older woman decided to restore a fresco of Christ and, instead, ended up with the fresco of something looking like a monkey, it is better to leave restoration work to the experts. We have a client who brought in a painting that fell off the wall in its vintage picture frame and asked us for help. While we are neither conservators of paintings nor of ornate picture frames, we felt that we could help as we had contacts
within the conservation community that were expets in both areas. Below are images of some of the damage done to the frame: 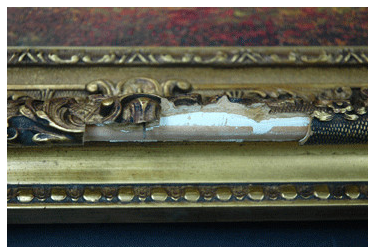 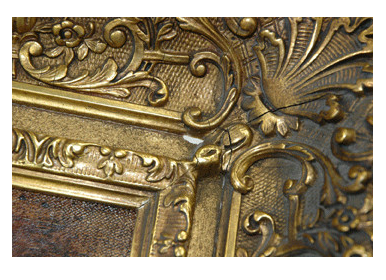 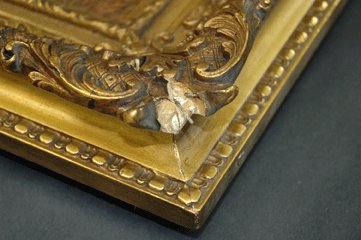 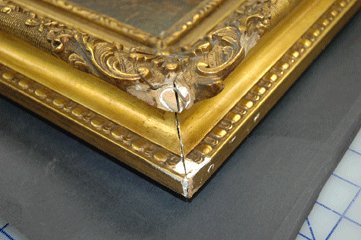 We knew a very fine closed corner frame builder and restorer in New York, a lady named Rhonda Feinman, and proceeded to call her and discuss the work that would need to be done on the frame. After sending her photos of the painting and the frame damage, she figured out that this painting was in a frame from the period of 1890-1920, done in a bronze paint, not a true gold leaf. The artist, a man named Bogert, was known to be from that period and his painting is signed by that name. So, we removed the canvas from the frame, packed the frame up and shipped it off to her to be restored.

The painting, we decided, would go to a restorer we knew up in Evanston, Illinois. The conservator was a man named Martin Katz, who owned a small frame shop in Northwest Evanston called G.A. Tremain & Co. Mr. Katz was one of our first customers when my Dad opened up his art supply business in 1946. Martin was a student at the Chicago Academy of Fine Art at the time. Martin was, truly, an old-school restorer, using only the finest pigments, the best brushes and importing his own gum spirits of turpentine from Europe. He even designed his own crank-up easel that he used in his atelier at the back of the shop so that the art can be brought up to working height, no matter what size it was nor where on the canvas the work needed to be done. He did some amazing stuff. He did a great job cleaning off years of cigarette smoke residue and oxidation using a painting cleaner formulation that dates back to the Renaissance. He applied several coats of semi-gloss varnish to help preserve the canvas for the next 100 years (the original was never varnished). There was also a small chunk of paint missing from the center of the canvas from when it fell off the wall. The canvas probably never looked better since it was first painted. As a post-script, Mr. Katz passed away a number of years ago, several years after he did this work for us. His son-in-law, Stephen Citron, carries on the family tradition of quality restoration to this day at G.A. Tremain in Evanston.

When the frame came back from Rhonda Feinman, it looked as if it were new and was perfectly restored. We replaced the canvas in the frame, called our client who came over to see it and was immensely pleased with the whole restoration. The restored frame and canvas were brought over to the client's office/loft and we hung it for him where it had been when it fell off the wall. This time we used 2 hooks instead of the original 1 hook that someone thought was adequate.

Here are images of the restoration (and please forgive the reflection from the flash. The colors would not have shown up properly without the flash): 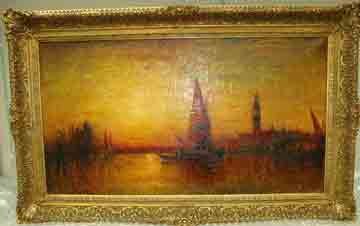 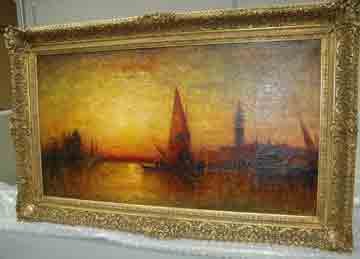 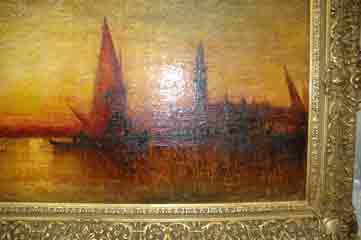 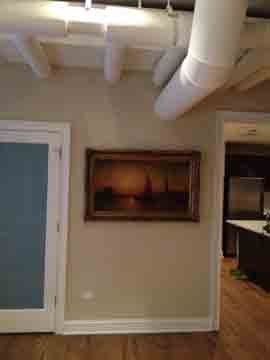