The daughter of a former educator and alderman from North Chicago brought in a box full of memorabilia belonging to her late father that she wanted assembled into a collage. What was especially challenging was that he had a hobby: Glass Blowing, and that she wanted us to incorporate a glass animal that he'd made into the montage. We had a number of photos, brochures, newspaper articles and testimonial literature from his funeral. In addition, we had to incorporate his safety glasses he used when glass blowing.

We worked out a grouping that made visual sense, with the largest item in the center and the other items orbiting this photo montage she had already assembled. The glass creation went top and center on its own platform. We had to wire it in place with 6 lb. test monofilament fishing line, so that it could be displayed vertically. We did the same for every other artifact, mounting them on a platform of the same burgundy suede and then cutting an outside bevel to expose the white core.

The whole project was mounted on a wooden strainer covered with a fabric-surfaced mat board and inset into a 6" deep plexi box. It could have been 5" deep, but we did not want to take the chance that the glass object would rub against the inner face of the plexi box and scar it over time from vibration. We considered other types of mounts that would allow the glass creation to be held in place by an acrylic stalk or a little L-shaped shelf. Both would have worked well, but what we used turned out just fine. The plexi box was fabricated for us by an outside supplier, but we did all the rest.

The detail images shown here are a closeup of the glass creature we lashed down, while the other is a side view of the whole plexi box displayed vertically. As a postscript, this project was done many years ago and we have learned, since then, that nylon monofilament fishing line can get brittle, over time, if it sits in direct sunlight for many years. Also, it is fairly abrasive and can leave grooves or marks in items that hold it due to vibration over a long period. For these reasons, we now use either cotton/polyester thread, fabricated acrylic mounts or mechanical fasteners that last nearly forever.

Photos and Framing designed and executed by Brian D. Flax, CPF
Images shown by kind permission of our client. 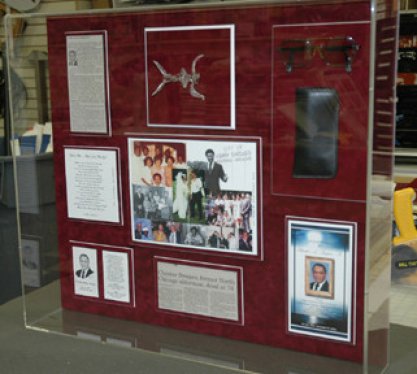 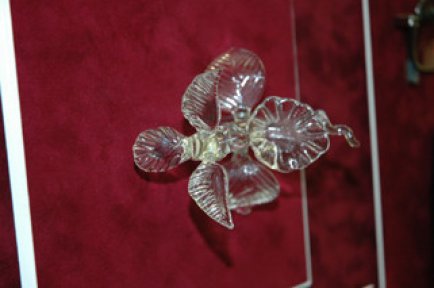