A client of ours on the East coast, while visiting New York City with his wife, saw the Broadway musical, Mama Mia! and kept the program and tickets as a memento. They really loved the show and he wanted to preserve these items for future enjoyment and display them at the same time. He emailed me about his desire to do so and wanted to know if I could create a framing treatment for these items with a " New York City flavor." After he sent me the items to frame, I went on-line and found a great photo online, showing the Broadway / Times Square theater district at night in all its garish, colorful glory. There, on the left side of the photo was a theater marquee that had the Mama Mia! title and image just like on the program.

I ordered in the print, which was 16 x 20, dry mounted it onto a piece of Crescent yellow-core black board and cut a window in it for the Playbill. I created a sink mat pocket to drop the whole playbill into (without any glue or tape) to preserve it. I cut a bevel on the outside of the mat to expose the yellow core on its perimeter. A foam core riser allows this primary mounting platform with the playbill to float.

Then, I took some extra yellow-core board and cut out some platforms the size of the tickets but about an extra 1/4" all around. I mounted the tickets onto the platforms and put some 3/16" tall foam core risers under the tickets to make them float in place. I adhered the platforms to the face of the photo mat. The ticket platforms hang off the edge of the primary mat. 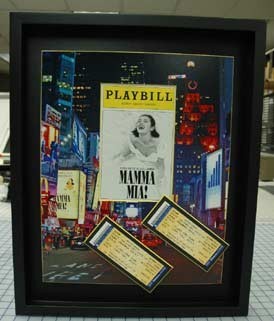 The main mat platform and tickets assembly was adhered to a drop-in, fold-up shadowbox that we created on our computerized mat cutter. We used Tru-Vue AR anti-reflective glass to allow the 3-D effect of the frame to be viewed with little interference. The frame used was a Nielsen Gallery Woods black matte ready-made frame. 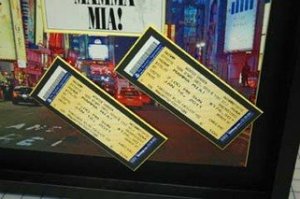 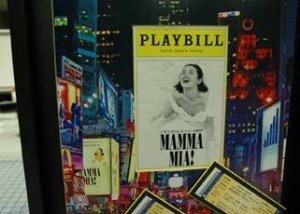 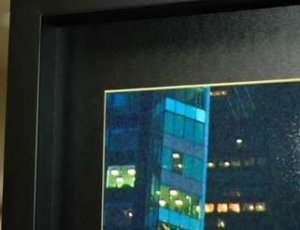