Our client and her fiancee decided to hike the Machu Pichu Trail in Peru, South America and took a lot of photos along the way. What we did to frame this event was to mount the map on black foam board first and glue it onto a black suede matboard. Then, we took her photos and arranged them in order of their ascent and arrayed them around the perimeter of the map. We mounted them onto black, acid-free board and then put foam board risers underneath each, recessed so as not to be visible. The photos were mounted on progresively higher platforms as they ascended the trail. In this way, the photos appear to float over the map.We also made sure that the glass did not make contact with the photos, since glass is a semi-conductor and can get moisture condensation on the inside face over time with large changes in temperature inside the framing package (e.g. if the art is hung facing a lot of sunlight).

We used a shadowbox-depth, cherry-finished frame by Nurre-Caxton and used Conservation Clear glass to keep it all from fading. Mat board is Carbon Black Suede by Crescent.The inside, vertical face of the frame has box strips covered with the black suede to hold the glass in place and provide a deep spacer for the platformed art.

One really nice thing about this technique is that it can be used to create large, photo montages, with photos overlapping each other at different levels. It doesn't need to look like a boring grid layout.

While it is best to live in the here and now, the pull of nostalgia for the past is mighty powerful. This is one way to indulge yourself in that little bit of daydreaming. 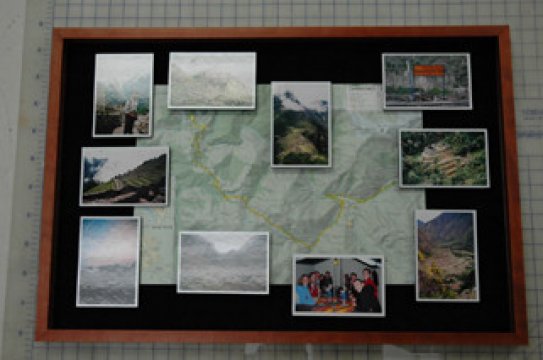