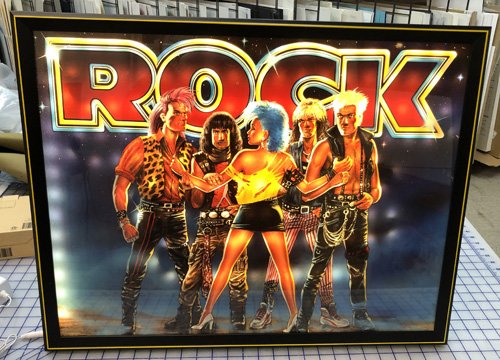 Our client brought in a colored acetate cell salvaged from an old pinball machine that dated back to his high school or college days. He wanted it framed and lit up inside, so that he could hang it in his music studio (he is a professional musician). We selected an Evald moulding that has a beveled face with a yellow pinstripe all around. This worked well with the word "ROCK", which is outlined in yellow. The art is sandwiched between two sheets of clear plexiglass. Originally, we were going to put a piece of opaque white plexi at the back of the art, but it was too opaque to allow the lights to shine properly. We went out and bought a 16 foot strip of LED lighting that we had, originally, planned to attach to the inside, vertical face (called The Rabbet) of the frame all around. The frame was not deep enough to put any other kind of lighting within. Also, the amount of heat generated has to be considered. LED's put out very little heat, relative to incandescent or fluorescent bulbs.

This, again, did not provide enough illumination for the whole piece, so we cut a sheet of white Alumalite (also called Dibond) to the same size as the plexiglass (about 25 x 19). Alumalite is an aluminum sandwich or composite that has polypropylene (plastic) corrugate in the middle between two sheets of aluminum. To that, we attached all 16 feet of LED lighting in the package. Note: You can, normally, cut LED lighting strips to any desired length. In retrospect, 20 feet of LED lighting would have been better for this project, but it was our first attempted usage of this type. The white coating on the Alumalite allowed the reflected light to reflect outwards. Originally, we were going to run it up and down across the whole panel. We did so and just taped it in place to see how it would light up the artwork. What we found was that it needed to be more concentrated behind the image of the words "ROCK" and the " band members" to give the best effect.

Here are some images of how that was done: 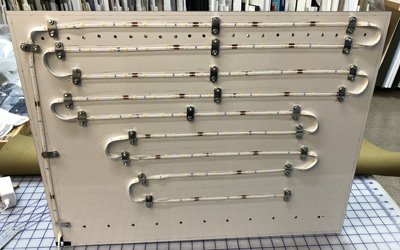 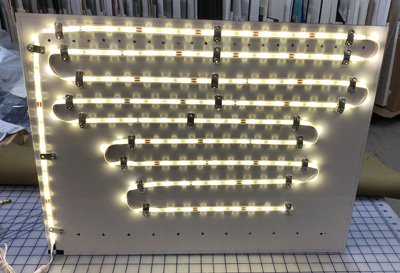 We used flat metal offsets that were bent, slightly, to hold the LED light strip in place at strategic points. While the LED light strip has an adhesive backing, we could not make it turn a corner and stay flat. Therefore, we needed to create hardware to hold it in place. As you can see, it worked out just fine. We learned a lot from this project and it turned out great! 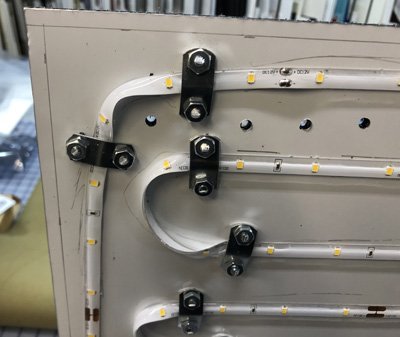 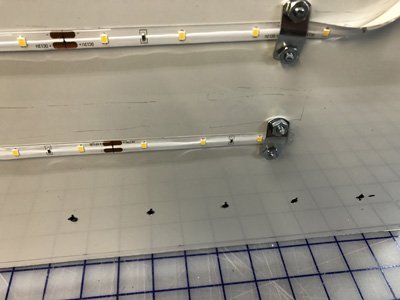