Every year, the LaSalle Bank of Chicago sponsored a marathon race in early October. The bank had been acquired by ABN AMRO some years previously and was about to be sold off to Bank of America (who still sponsors the Marathon every Fall). The last marathon run under the LaSalle name, held in early October 2007, had record heat and got cancelled about half way through. Nonetheless, our client, Tom Mosher, is a hardy gentleman who finished the race anyway and got a participation medal for his efforts. In addition, he brought in a number of other track medals from other marathons and track events to include in the composition.

Our shop manager, Dana, cut a mat opening to crop unwanted information from the newspaper clippings used in the shadowbox. Using clever slots, she pulled the ribbons attached to the medals through those slots and fastened them on the back so that they could be kept whole and did not need to be cut. The frame she selected is a Larson-Juhl Metro Onyx, that is a tall, curved, shadowbox-depth frame. Inside size of the frame was 17 x 26 and the glass she selected was Tru-Vue AR anti-reflective clear glass, to allow unobstructed views. Deep frames, like this one, need clear, anti-reflective glass, since the objects to be viewed are far away from the glass. The matting used was a brown linen by Bainbridge, #4126. 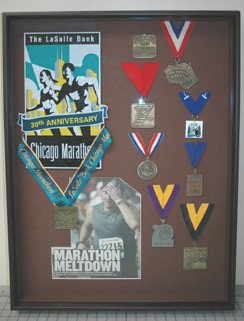 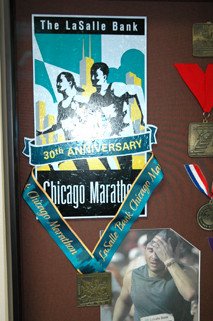 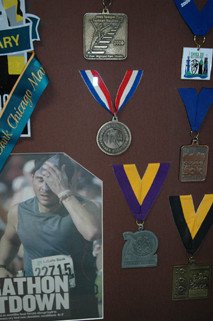 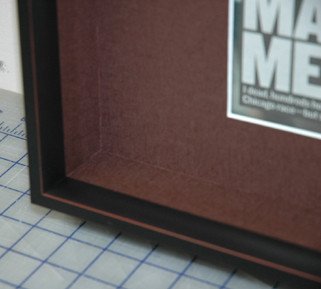 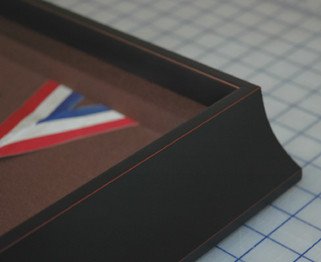