One of our clients from the John Marshall Law School in Chicago brought Dana, our shop manager, a collection of objects relating to a bill that was passed in Illinois government and signed by the then-governor,  Pat Quinn. The objects we were to frame included an actual pen from the signing, miniature photocopies of the bill, a photo of the signing ceremony and the photo of the signature portion of the bill.

Dana created a very cohesive, well laid-out framing montage from what she was handed. The frame is a Larson-Juhl Gramercy Black cap with silver edge #147790. The glass is anti-reflective AR glass by Tru-Vue, making it very easy to see all the detail with very little reflection. The mat is B8012 Brushed Onyx Alphamat by Bainbridge, a very black, slightly shiny mat that looks very crisp and finished. She cut a square V-groove into the mat before cutting the 4 openings relating to the actual copies of the bill, visually pulling the 4 openings together.

The frame was done as a shadowbox to accommodate the 3-D object (the pen) in the lower right corner. The pen is held in place with nearly invisible mylar strips that wrap around the pen in 2 spots, pass through a slit in the bottom mat and get fastened to the mat's back side. A very clever mounting!

Click on the photos below to enlarge for viewing: 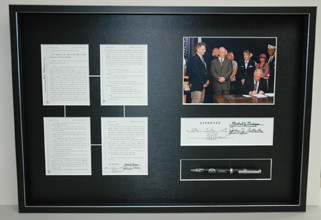 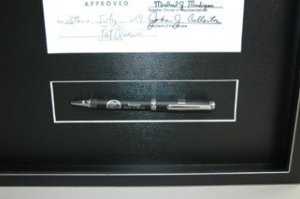 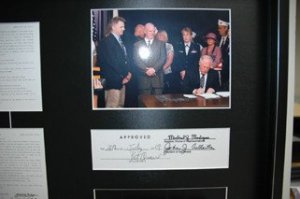 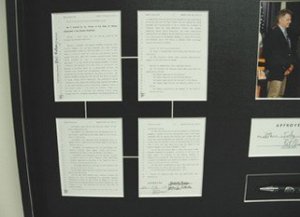