Our client's son was part of the Chicago, Illinois hockey team (traveling league, high-school division) that won the US Nationals in their division. His dad brought in his hockey jersey and a pile of memorabilia that went along with this championship event and asked us to design a shadow box frame for all this. We do a lot of jerseys and it is always better when you can include some of the things that we framed along with it, such as a team photo, photo of the player, patches, etc. This one was a lot of work and careful engineering, but the end result was "kick-ass" (that's framer talk....). Check it out: 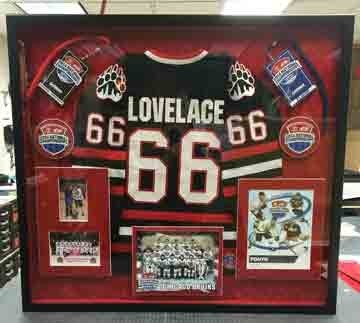 In order to incorporate all the desired elements, we had to suspend each of them on floating platforms that were secured to the base matting to which the jersey is couched (sewn down). The memorabilia are attached to platforms which actually hover over the jersey. The following photos show each of these elements and how they were done. Many of the shots were taken before the final assembly of the whole collage.

Note that all elements are mounted on Crescent 5510 Red Sky Suede matting, with 1/2" or 1/4" gator board or foam board risers beneath them. None of the elements are attached to the jersey, only to the matting areas around the jersey. The frame used is an Omega 80332, which is 1 1/4" wide, 2 inches tall with a rounded outer edge. It is a very solid, sturdy frame, glazed with Tru-Vue Conservation Clear glass. Glass size is 40 x 36 and the depth of the box strips inside the shadowbox are about 1 1/4" deep. The platform with the jersey and memorabilia rests against the box strips inside the frame. The strips also help hold the glass in place. 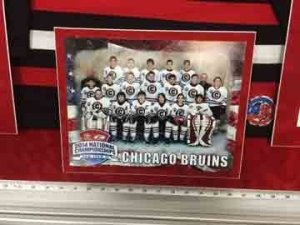 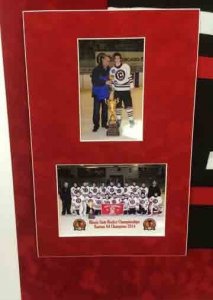 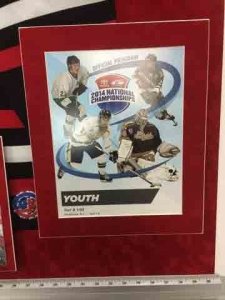 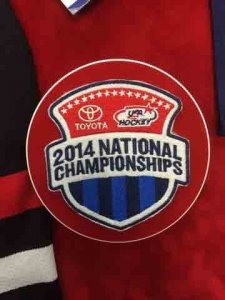 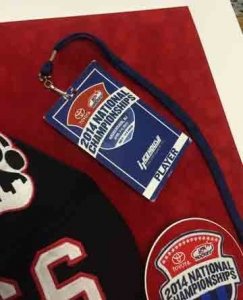 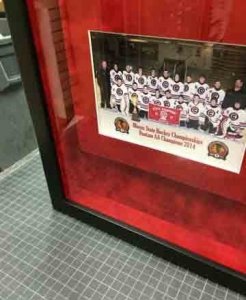