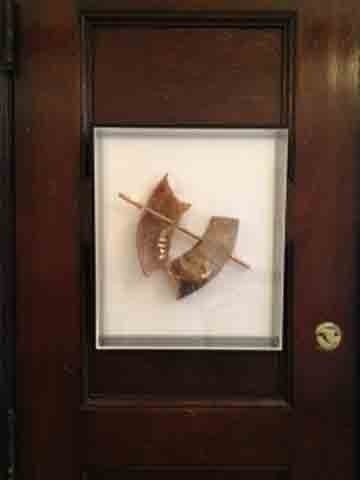 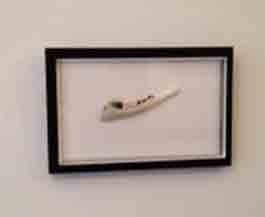 One of our clients, Ms. Miller Opie, creates some visually interesting 3D sculptural objects using organic and inorganic components or found objects of a natural origin. Shown here are two such sculptures. One is made from the mandible or jaw bone of some animal, maybe a deer, that has had some polished stones inserted where teeth once grew. The other is a split cow horn with teeth that has been pierced with a wooden dowel and held in place by windings of copper wire.

When we were presented with these objects to work on, it occurred to us that we could display them in a plexibox. Our client wanted something that looked more finished than that, so we came up with a design that we have used before that is very attractive:  The Flanged-Lip Plexi Box. It consists of a traditional plexibox that has had an acrylic lip added to it all the way around the opening. The lip attaches at a right angle to the box's sides. This lip is hidden under the lip or rabbet of a traditional picture frame. It forms a clear, all-encompassing projection coming out of the front of the picture frame. It allows for being able to see the object from nearly all sides. While you can use nearly any shape or size picture frame moulding to surround the plexibox, our client wanted something small, black and very basic. We used a Gemini 2940 black cap moulding to do this. 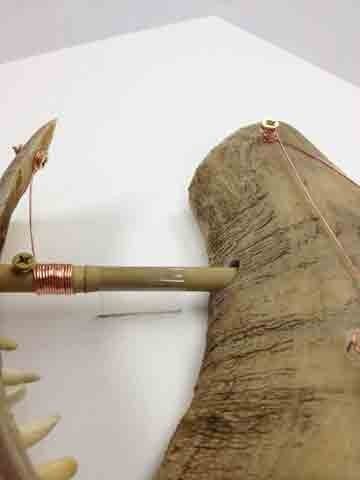 Note the clear mylar band looping over the shaft.It is clear, strong and removable. 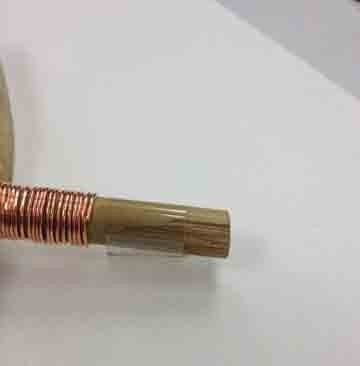 Here, again, is a clear mylar band used to hold the objecte in place in a non-invasive manner that is totally reversible. 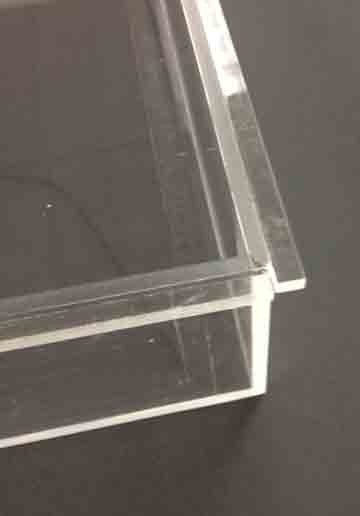 The "flanged lip" attached to the plexi box at a right angle, which is hidden under the lip of the frame. It can be made to any size or depth.

The most challenging part of this project was figuring out how to secure the objects in place while being minimally invasive. By that, we mean that it is important to secure the object without damaging it or permanently altering it, using removable fastening systems. As you can see in the case of "Untitled 1" (split bull horns), we used clear mylar bands that looped over the dowel and passed through a small slit in the C7519 Crescent White Linen mat board we used as the base. "Mandible" was held in place with a combination of mylar straps and off-white linen thread looped around the object. We did not use nylon monofilament (fishing line) since we find that it is very sharp and abrasive, and can actually cut the object being held in place over time if there is enough vibration.  Inside the "Mandible" box, the dimensions are 12 3/4 x 7 5/8 x 1".  The "Untitled 1" box is 14 1/2 x 17 x 3" inside.

Framing designed and executed by Brian D. Flax, CPF
The first two photos of the finished  compositions are by Miller Opie.
All other photos by Brian Flax