A client of ours is a baseball fan. Big time. He got to throw out the first pitch at a Chicago White Sox game this year and had one of his staff bring in a pair of baseballs (one that he threw, the other autographed by the starting pitcher), along with photos to match. We designed a great frame to display all this cool sports memorabilia, something that will last for years and look great on his office wall.

This is what is known as a "flanged lip plexi box." It is a traditional, matte black wood frame with a plexiglass box that projects out the front of it. The box is held in place by means of a lip glued to the bottom edge of the box's sides at a right angle, allowing the box to hook under the lip of the frame. They can be made to project out as far as you want, with either square, rounded or chamfered edges. They can be made from regular plexiglass or OP3 u/v filtering plexi. Here, we needed the extra depth so that the acrylic baseball holders could stick off the front of the mat. The photos are behind the mat in traditional openings. The mat used was a Crescent Etched Black with white core. The primary frame is a matte black, flat top wood by Studio Moulding.

Think of what sort of items you could have us frame this way, as well as the lovely weather you would be enjoying watching "the boys of summer" play baseball. 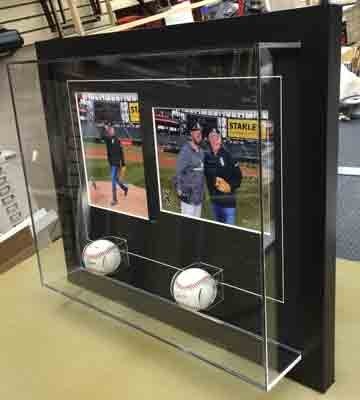 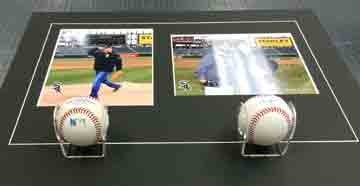 The baseballs are held in place by bent acrylic ball holders. No glue or adhesive was used to hold the balls in place. This preserves the value of the artifacts. 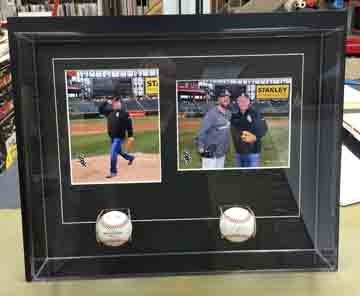