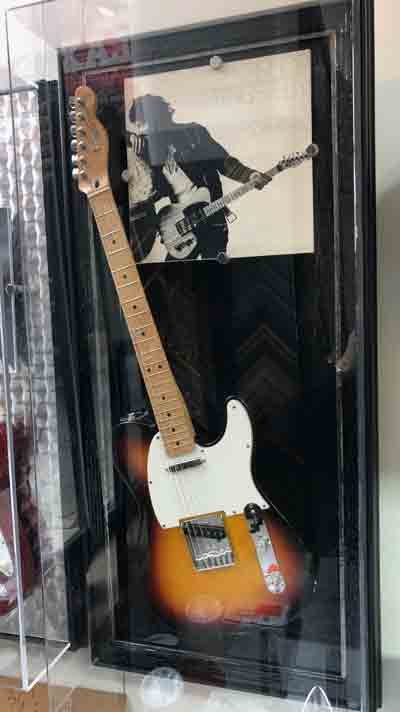 For guitar collectors or anyone who wishes to display a guitar of any sort, may we recommend our Gravity Groove frame? It consists of a canvas floater picture frame with either a base covered with some form of acrylic (the Stratocaster on the left) or a canvas floater frame with another decorative frame and a space in between them into which the acrylic plexibox gets inserted. The Telecaster, on the right, has two frames visible. In the one on the left, the panel leaves a groove all the way around, into which a plexi box is inserted and held in place by friction. It will hang horizontally or vertically, depending upon how you want to lay out the collage. While it could be just the guitar, we decided to add an LP held in place, on its edges, by edge gripping standoffs.  The two guitars are held in place by two custom acrylic brackets that attach to the shoulder strap attachments (one on the bottom edge of the guitar, one on the top, left horn).Other memorabilia can be added, such as photos of the artist in concert, a guitar pick used by the artist or you could even create a photo collage of the artist that could be mounted flat and covered with plexiglass to serve as a background behind the guitar. It just depends on what you have and how busy you want it to look.

The panel behind the guitar, on the left is known as Radial Acrylic. You can also order solid black, solid white or even mirrored acrylic, depending upon the desired contrast and net effect desired.

In the case of the Stratocaster guitar on the left, we used an LP that is a compilation of Dire Straits material. The red and white "Strat" was a trademark guitar of Mark Knopfler, founder and lead guitarist for the British band. They used a photo of it on the album cover and so we thought it would be a natural for our display. Our guitar has a maple neck on it and the one on the album cover has a neck inlaid with Rosewood. Still, it looks pretty darn cool.

The Telecaster guitar on the right is a model that was used extensively by Bruce Springsteen. We used an LP that shows him holding one that has a different finish but is the same model, just to show the association. We have seen him use a guitar with the same paint job as the one in the plexibox. 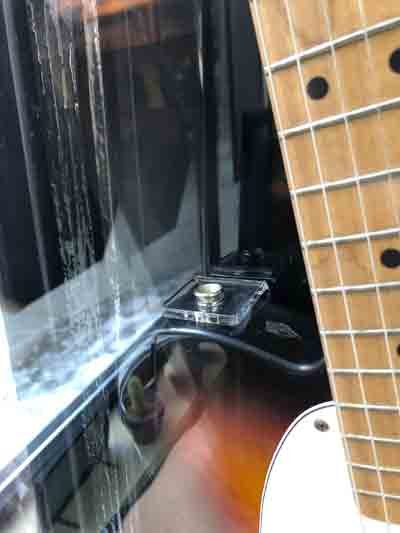 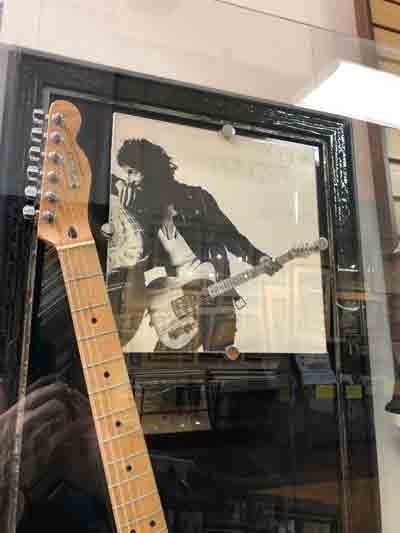 The acrylic plexi box shown here is actually deep enough for an acoustic guitar, but can be ordered to just about any depth beyond the amount needed to fit into the Gravity Groove. In fact, you can put just about any 3-D object in this box that you wish. It could be swords, flintlock rifles, or any collection of objects for display, only limited by your imagination. The gravity groove plexi box cover slides into a groove between an inner and outer frame and can be pinned in place by means of a screw at the top and/or the bottom of the outer frame.  Because the plexi box is heavy, it is not recommended for putting on and taking off a lot. 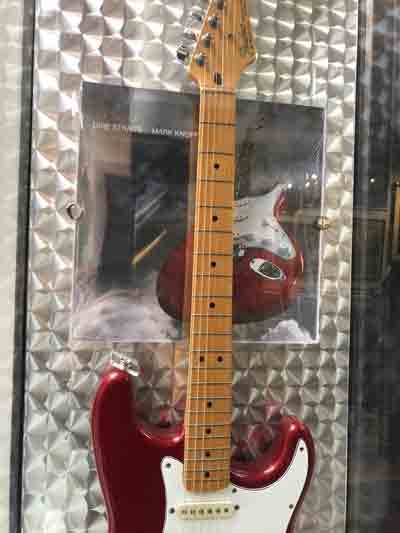 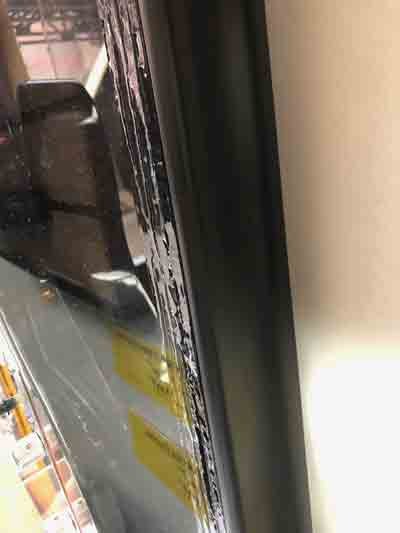 Therefore, this is not the sort of display box that allows for taking out and putting back the object on a frequent basis. It is, mainly, a static display. If you want a display case that allows you to take your guitar in and out of it on a regular basis, we can design a case with a wooden frame on the front that is attached to the main shadowbox by means of a piano hinge, with latches on the front. The box can have a commercial "guitar hanger" that normally attaches to the wall, that hangs the guitar by its head stock for easy access at any moment the urge to play may strike you.

The guitars shown here are from Brian Flax's private collection. They are, perhaps, among the most iconic of all guitars from the late 20th century, next to the Gibson Les Paul and the SG.

Post Script: The Maple Telecaster plexi box was stolen from our frame shop on 5/30/2020 during the BLM protests and subsequent rioting and looting. The red and white Stratocaster plexi box was almost taken that day, but the looters could not get it off the hanging system or ran out of time. However, we moved it to the other side of our shop to a different display wall, where it was stolen during a break-in on 1/15/21 by a desperate guy who tried to sell it to CTA personnel on the L platform outside our shop. He tried to get $50 for it but was unsuccessful in his attempts. At this time, he is in prison for parole violations and for breaking into our shop. Clearly, our picture framing is so good that people are willing to do nearly anything to obtain our work. It works a lot better, we believe, if you just come in during business hours and, actually, buy it.

Here are a few more details. Click on the photo to enlarge the image: 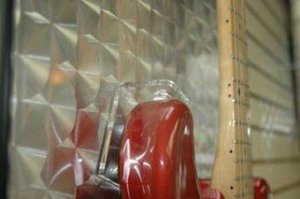 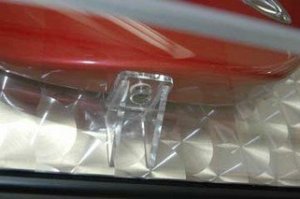 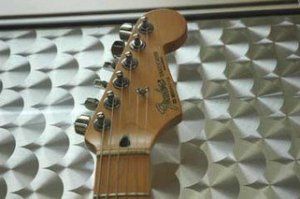