Based in the heart of Chicago's Loop since 1946, Flax Art & Frame started out, originally, as The Flax Co. It was just after the end of World War II when Donald and Alvin Flax, two veterans and brothers from Bayonne, New Jersey, came to Chicago after Donald left the Army and Alvin left the Navy to start up a new business. With cousins in the art supply business on the east and west coasts, they opted to come to the "third coast", Chicago, to start up an art supply business of their own using their cousins' businesses as a template. 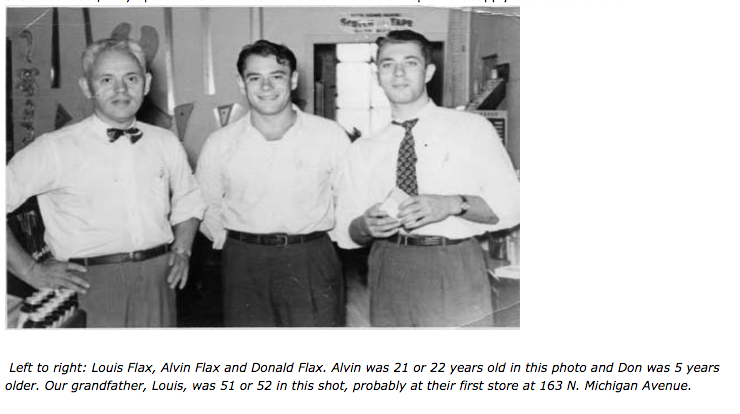 Over 74 years later, Alvin's son, Brian, owns and operates the company in Chicago, though it has changed a lot since those early days. When it came to art supplies, both commercial and fine art, they were always considered the "class act" in Chicago, even with a half dozen competitors in and near the Loop.

In the mid 1970's, they made a foray into the fine writing instrument business and had the largest pen shop, within their art supply store, in the Loop for a very long time. They exited that business in the early 2000's as, again, technology made the upscale writing instrument business an even tinier niche industry, as many of their best customers turned to electronic writing more than hand writing. Palm Pilots, Smart Phones and Laptop Computers were the new way to communicate. The pen business came to a virtual standstill, for them, in about 2005 .In spite of that, they hung onto the Lamy pen brand, out of sentimental desire, until late 2019, since it was their first pen line in the late 1960's. But it, too, succumbed to the internet and the further shrinking of the market for those products. It is no longer offered as part of their business.

The Flax Company was one of the first art suppliers, in Chicago, to offer dry transfer lettering and many materials innovations to the commercial art studios in Chicago over the decades. They were the first to import Euro-Style drafting tables and seating into the USA, working with the Italian manufacturer Bieffe. They were among the first art suppliers in Chicago to offer Magic Markers to the advertising trade, Japanese drafting machines  to the engineering and architectural trades and specialty lettering machines to entities like NASA.

In the late 1980's, the desktop publishing revolution changed everything for them, along with every other art supply company. The personal computer, as well as software like QuarkXpress, Adobe Pagemaker, Microsoft Word, Photoshop and others, rendered obsolete many of the commercial art supplies they sold. Thousands of dollars of dry transfer ("rub down") lettering sheets, rubber cement, mounting boards, airbrushes, all the things used by commercial artists became obsolete within a short amount of time. They knew that this was a watershed moment for the art material industry. At that time, too, many of the commercial artists who got into the field right after WWII began to retire and a younger generation of commercial artists and designers entered the field, a group more willing to embrace technology. With 50 to 60% of their most profitable merchandise no longer saleable, they had to take a step back and closely examine their business. What to do?

After a lot of research, in 1988, Brian began the transformation and reinvention of the company into what it is today, after 32 years:  The only full-service picture framer in the downtown, Chicago Loop.  In 1997, Alvin Flax retired from the firm as the last survivor of the original company. At the age of 71 (he had been in the business for 50 years at that point), he was not interested in starting over. He passed away just shy of his 78th birthday in November, 2003.

While the company has been located at a number of locations over the years, it currently resides at 220 S. Wabash Avenue in a renovated space that occupies about 2800 square feet. Brian and his 3 employees are all Certified Picture Framers as tested by the Professional Picture Framers Association. In addition, his shop manager, Dana Fisher has become a Master Certified Picture Framer, one of only 6 dozen in the USA. The entire framing team has extensive experience in all facets of picture framing and its related disciplines. They are, as we like to say, "Total Pro's."

It is gratifying to have a lot of repeat customers and clients. Our approach is one that requires us to educate our clients about the framing process and help guide them to, what we believe, will be the very best design solution for their particular framing project. However, we like to think of it more as a collaboration, where everybody has some "skin in the game." In the end, it is the client's decision that  dictates how we proceed. Since we know, from statistical research, that fewer than 7% of all households in the USA have ever been in a picture framing shop, we treat all newcomers (and regulars, for that matter) with care and respect. That way, they will feel more invested in the frame design and take pride in it when they hang it up in their home or office. It is our goal to be their "go-to" picture framers.

Our motto sums it all up:  "We Frame Your World "