A client of ours, who is an avid American Civil War re-enactor, brought in a vintage Civil War saber that saw action during that period. He wanted us to frame it in such a way that he could display it, but still have access to it when needed. Our shop manager, Dana, came up with a great design that filled the bill. Not only did the top half need to be hinged, but there had to be small hasp on the side that could fit a lock to keep casual explorers from opening it to check it out without our client present.

The frame is made from two profiles by Omega Moulding. Both are part of the same series in the Kona Bean color (a dark reddish-brown). The top half is profile 80585, a flat-top wood moulding with a bit of grain showing. The bottom half is, actually, a floater frame from the same series, Omega 80586 in the matching color. Both halves are held together by means of a brass piano hinge that runs the length of the frame along the top edge. There is a hasp for a small lock on the lower left short side.

The backing against which the sword is silhouetted is a masonite panel that has been covered with an unprimed, unbleached, Belgian linen artist's canvas by Tara Fredrix.

The acrylic mounts that hold the sword were fabricated by Dana out of round acrylic rod and 1/8" plexiglass for a hook to hold the sword hilt. The edge rest has a light notch cut into it for the sword edge to rest in.

Glass used was Tru-Vue Museum Glass, which is u/v protective up to 99% and is nearly invisible. Overall size is about 39" x 11".

The frame is shown in one of the photos with an aluminum "French Cleat" or "Z-Bar" for hanging it on the wall securely. Both halves of the Z-Bar lock into one another, with one half screwed to the wall and the other to the back of the top edge of the frame. Both halves are shown in the photograph, held together by some tape before wrapping up the finished sword showcase).

To view and enlarge the photos at the bottom, simply click on them. 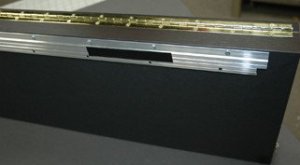 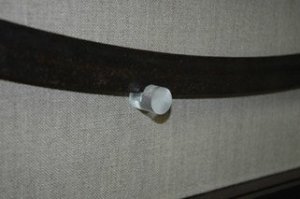 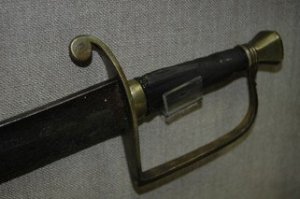 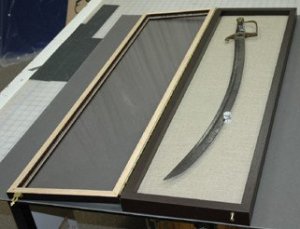