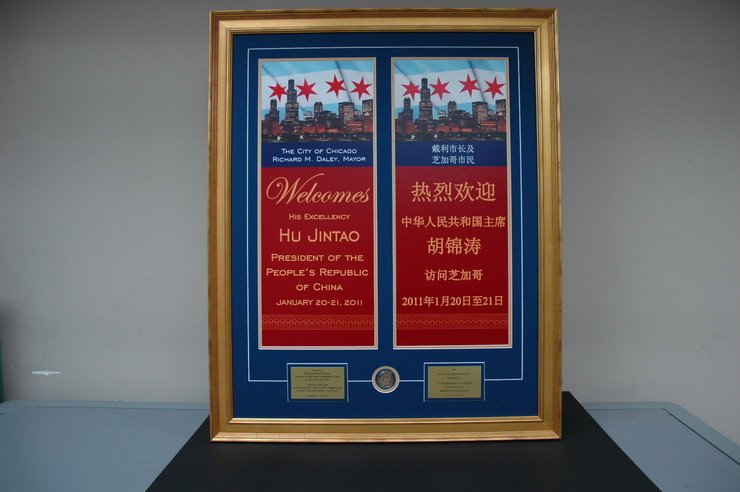 When we were contacted by the Mayor's Office of Special Events to create a presentation frame, we were told it was to be given to the visiting president of China, Mr. Hu Jintao. This was the first time the president of China had ever visited Chicago and Mayor Richard M. Daley wanted to make a good impression on the Chinese. We had 6 days to create this frame. I'd heard from out of town visitors and foreign tourists, over the years, how Chicago is such a hidden treasure and a wonderful place to visit, so we did not want to disappoint.

The Mayor's office supplied us with two vinyl banners, one in English, the other in Mandarin Chinese, welcoming the president to Chicago. They also gave us copy to use when we had our local engraver create two laser-etched plates to incorporate into the layout. We mounted them on mat board plaques after determining that the double mat openings we had originally planned to surround them with would have put the yellow gold mat next to a different color of gold in the plates and make it look awkward. We centered the plaques on the V-groove that surrounded the whole composition and it worked out really well visually.

Pat Daley, my contact at the Mayor's Office of Special Events, supplied me with a commemorative bronze disc that bears the insignia of the City of Chicago and its founding date in the early 19th century (incorporated March 4, 1837). We used a Larson-Juhl 573235 Academie gold leafed wood frame made to 29 1/4 x 37 in size, Tru-Vue Museum Glass, and matted it in Bainbridge 4101 Navy linen over Bainbridge 4849 Buddha Gold Silk.

To view enlargements of the images below, simply click on them.

Photo images by kind permission of our client. 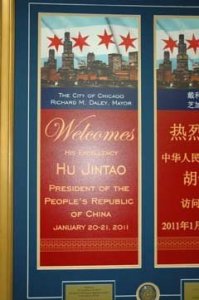 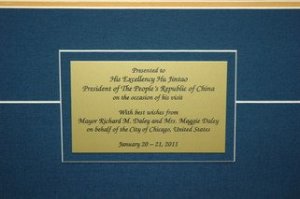 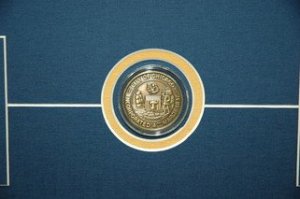 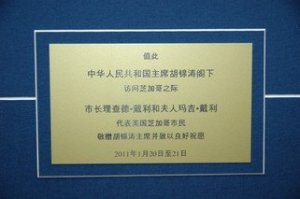 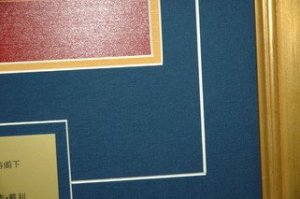 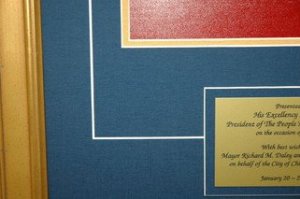