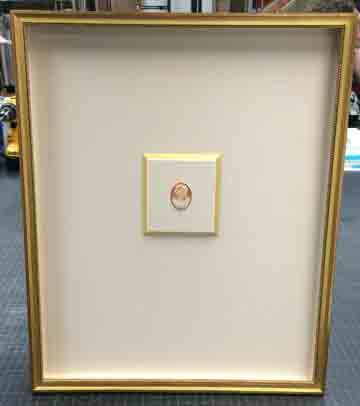 Our client wanted us to frame a cameo that was in her family for a long time since she did not want to wear it. Instead, she wanted to display it on her wall in a shadowbox frame.  One of the requirements was that we could not construct a metal cabochon to contain it (a small brass band that curves all around it and leans in a bit to keep it from moving. Instead, we had to cut a small mat with a reverse bevel on an oval-shaped opening that would, by friction, hold the cameo in place. This took a lot of experimenting to get the right size. We cut it in an 8 ply-thick mat board with bevels on the outside. Also, a piece of fabric covered mat board that matches the shadowbox was adhered to the front of it. The 8 ply mat board outside bevel got painted with metallic gold acrylic.

Here, you can see the effect of a larger frame and a smaller subject, with tremendous emphasis given to the cameo inside a large, nearly empty space. The effect is striking! We used a Tatami silk mat by Bainbridge to created the shadowbox, anti-reflective glass and a closed corner gold leafed frame. 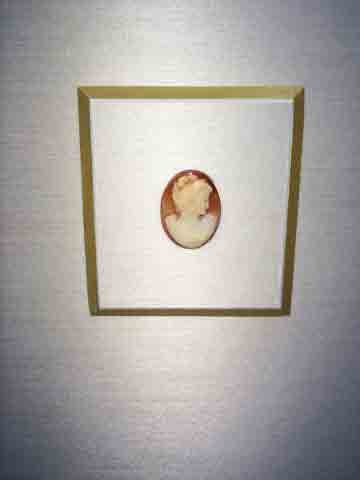 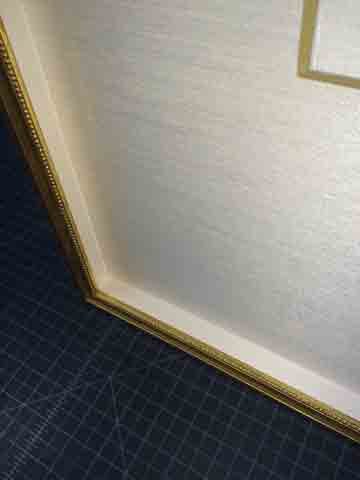 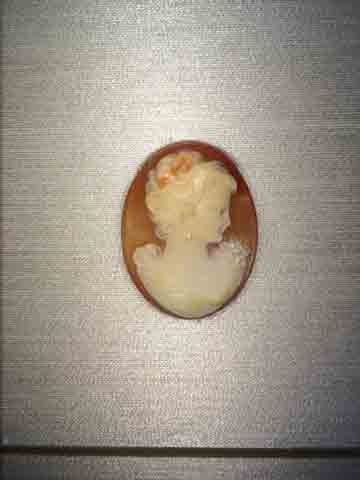 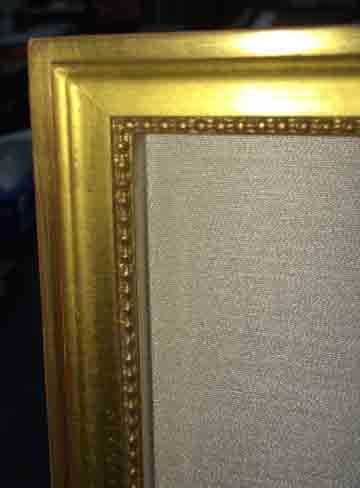 The frame is a 23 kt. gold leafed, closed corner frame by Rhonda Feinman of New York. We had her take an existing frame pattern and add some additional depth to it before applying gesso and leafing to the frame. For those who don't know, a "closed corner" or "finished corner" frame is different from your average frame. Most frames in a frame shop are cut from an 8 or 10 foot length of moulding that is already shaped and finished. You can see the miters at the corners where they join. With a closed corner frame, the basic wooden base of the frame is cut and joined, then it has any beads, or ornamentation glued onto it. After that, it is coated with gesso to seal the wood, painted with a sizing or glue and then covered in gold leaf. The leaf is real, 23 karat gold and is burnished  down to smooth it out and shine it up. Finally, a varnish is added to either enhance or change the color of the leafing. it is time consuming and expensive, but the end result is noticeably different from your chop-and-join standard picture frame. The closed corner frame really helped make it look outstanding.

An alternate method to the painted bevel platform might have been to frame it in a small, petite, slender frame and then anchor it in the middle of the shadowbox. This was beyond the client's budget, however, but would have looked just as nice.

Images shown by kind permission of our client.