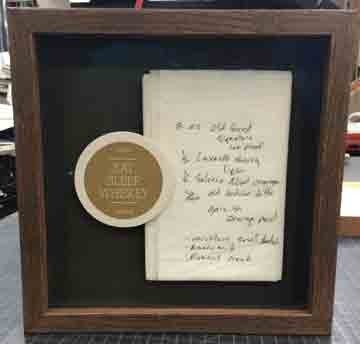 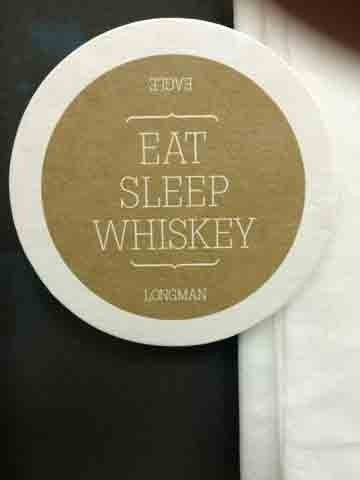 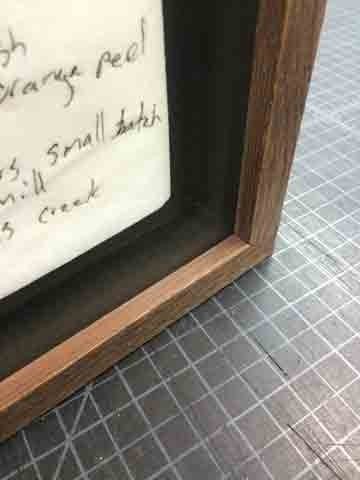 Our client and his significant other took a long weekend car trip down to Bourbon country in Tennessee. They visited some distilleries and came away from one with a humorous coaster and a recipe for something that included, among other things, bourbon, written on a napkin by someone of importance at that distillery. So, he brought them in, said he wanted them framed and asked us to design something memorable that he could give to his lady friend.

We decided to do a shadowbox frame, suspending the two items on platforms to make them appear to be hovering within the frame. The frame used was Larson-Juhl's "Axel" collection, which uses antique chestnut from reclaimed European lumber that is several hundred years old, grain cracks and all. It is really cool looking wood! The shadowbox was lined with Crescent Moorman Linen in Medium Brown. Glazing is anti-reflective Artglass UV (simiilar to Tru-Vue Museum Glass), which is important to use to (A) prevent fading and (B) make it easy to see the contents of the shadowbox. Frame size is 10" x 10". Here are some details: 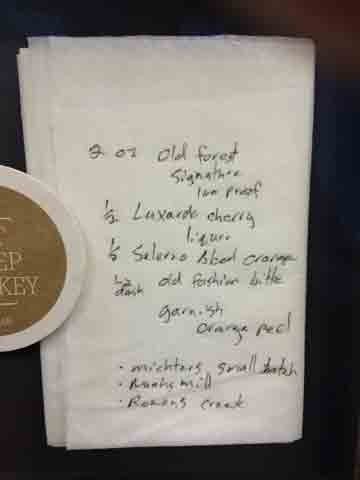 The napkin was the most challenging item to frame,since it was a paper napkin that was still folded. To secure it in place, we placed a strip of mat board inside the napkin at the main fold and then slid a strip of clear mylar through the napkin and folded the mylar around another piece of mat board at the very back of the napkin. We taped the mylar to itself and then glued it to a 1/2" foam board riser cut slightly smaller than the napkin. In this way, the napkin was held in place, but could be removed later on if desired.

The overall photo turned out a bit blurry (not sure why), but you can see most of the details. It is a simple shadowbox, but it captures a memorable weekend. Tours of wineries and distilleries are a lot of fun and give you a chance to sample some really good stuff! Try it sometime.