One of our clients had come in to have us mat her ketubah (highly ornate Jewish Marriage Contract, seen elsewhere in the Framescape Gallery) so that she could have it signed at her wedding to keep the document protected, until it was time to frame it. A friend of hers, Alicia, had come along with her. A publisher we know (Phil Thompson) had just brought in some posters for the Bank of America Chicago Marathon that was coming up in a week. Alicia, being a marathon runner, saw the poster and decided to frame it along with what she hoped to bring back from the BOA Marathon: A participation medal (for finishing) and other memorabilia. As you can see, below, she was successful: 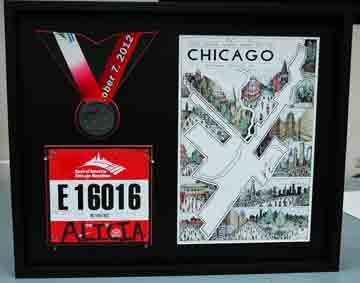 The frame was designed by our shop manager, Dana, who created a mat board platform that follows the shape of the draped medallion and ribbon. The runner's number bib was dry mounted onto a piece of red-core black Crescent Brite Core mat board #CBR34921 and it has a riser behind it to give it a 3-D look. The marathon commemorative poster is matted in the actual shadowbox base. The base shadowbox was made from Crescent 5579 Etched Black mat board. Glass is Conservation Clear (normally reflective glass but has a 99% u/v filter). 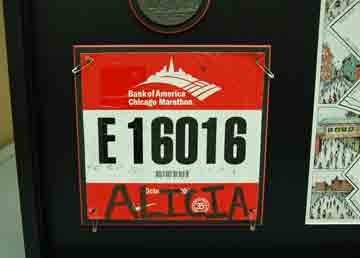 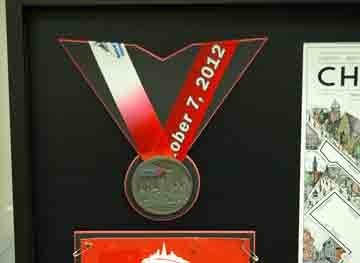 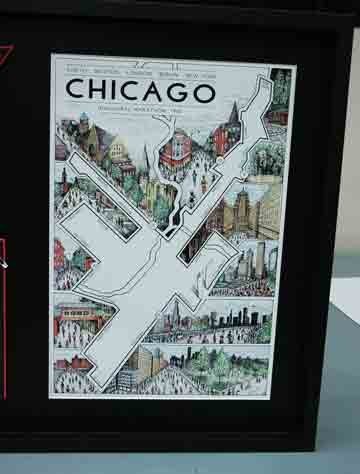