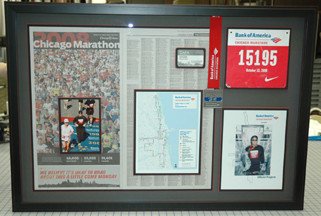 When our client came in with a bag full of memorabilia from his run in the Bank of America Chicago 2008 Marathon (formerly the LaSalle Marathon prior to the acquisition of the LaSalle Bank of Chicago by BOA), we sorted it all out and collaborated on a really great collage that would be installed in a shadowbox frame. The term "shadowbox" simply means that the frame is deep enough to hold more than flat art and may have 3-D objects in it as well. Clearly, this meant a great deal to him, as he already had a carefully thought out layout of what he wanted. I made some suggestions and refined the total concept a bit more until he was satisfied that is was what he wanted. It was fun to work with him on the design.

While this is ideal, from a framer's standpoint, we do not expect you to come in with anything more than a basic idea of what you would like, along with your memorabilia to create a collage frame. If you aren't even sure of what you want to end up with, we would be glad to make a number of possible suggestions and create a cohesive, interesting design that achieves your objectives. In the end, the design will be a collaboration between you and your framer and no attempt will be made to force anything on you that doesn't look great. After all, you are the one who will have to look at it for a long time, so spend the money once and let it be something of which you are proud!

In this case, we decided to use a Studio Moulding "Array Ebony"  frame moulding, which is a tall profile (ST43021) that has a matte black finish with a red undercoat that has had the red exposed at all the edges where the planes change angles. It really is a great molding finish and has been used a lot in our shadowbox designs.

We floated many of the elements on Crescent BR343921 Brite Core Black, which is a black mat board with a red core. All elements were floated against a background mat of Crescent 1576 Dark Gray rag mat. The rabbet inside the frame (the area under the frame lip) was also lined with Dark Gray mat board to support the glass and the shadowbox platform. 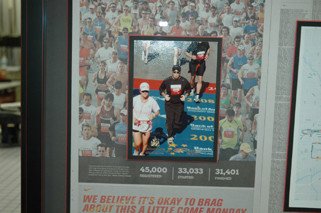 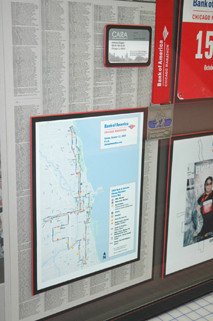 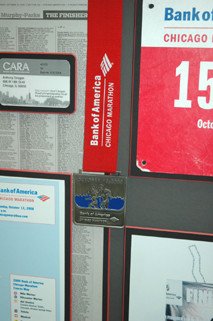 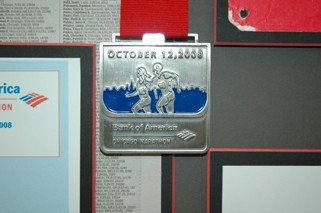 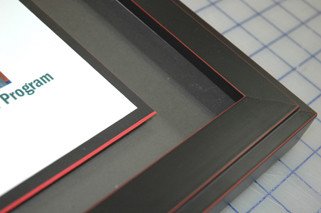