An advertising agency client of ours here in Chicago, Goble and Associates, approached us to shadowbox frame a pair of original Wheaties cereal boxes that had been autographed with an inscription by Olympic speed skater Joey Cheek. They also wanted an engraved brass plate to be included in the composition.One of their staff members designed the basic concept and then left it to us to figure out how to execute it.

We had 2 challenges to surmount to accomplish this. The first, and most important, was creating a frame deep enough to handle a cereal box, which was just over 2" in depth. The other was how to suspend the box in place without worrying if the glue might let go at some point. 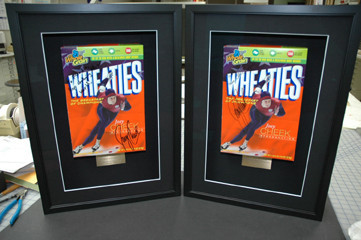 The depth problem was solved by taking a Gemini 7502 shadowbox moulding that was about 2 1/2" deep and extending it with a Gemini 2930 black satin finished plain flat cap moulding (about 1" deep), turned on its side with the lip sliced off on a table saw prior to chopping and joining. Once glued and screwed into place, this extended the 7502 moulding to a depth of about 3 1/4". We still needed an air space between the front of the cereal box and the glass as well as some additional room to put a backing board in and framers points to hold it all in place.

The problem of securing the box was solved using a solution that we had seen at the WCAF show (a national framing conference held annually) in a seminar put on by James Miller, MCPF,GCF. It was how he used a wide strip of mylar to secure a book in place in a shadowbox frame, passing the mylar through the book and then slipping the two ends into slits in the backing board, securing them on the rear of the backing board. I adapted this strategy after assembling the boxes, though it required cutting a slit at the top and bottom of the rear of the cereal box in which to pass through the 5" wide strip of mylar. It worked really well for this project.

We used a white core, Carbon Black Moorman linen by Crescent Cardboard for the mat up by the glass as well as the panel on which the cereal boxes were affixed. The glass was TruVue Museum Glass, which would provide crystal clear viewing and would minimize the color fading of the printed boxes and autographs. We lined the inside of the frame with black foam board to hold the glass in place and create a ledge against which the cereal box panel could be fastened.

The engraved brass plates, done by our local engraver, we silicone- glued to the mat just below the cereal box. In retrospect, we thought that it might have been better to have mounted those on mat board panels with 3-d foam core risers underneath to move them further out towards the glass and make them more readable. Still, the final result was very satisfying and the clients were thrilled.

Photos by kind permission of our client. 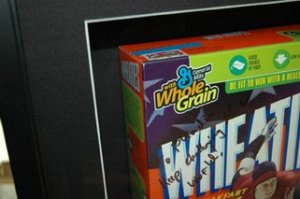 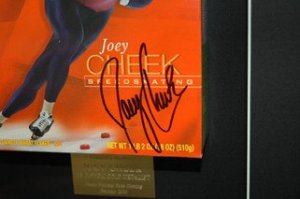 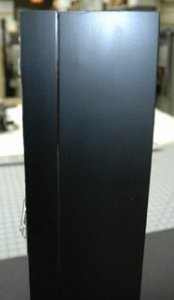 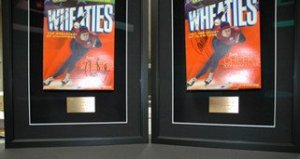 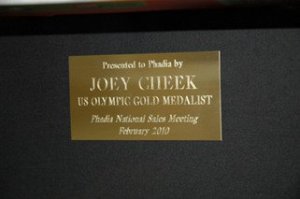 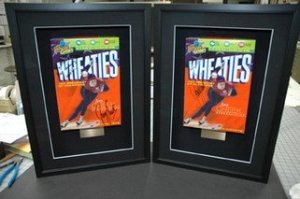