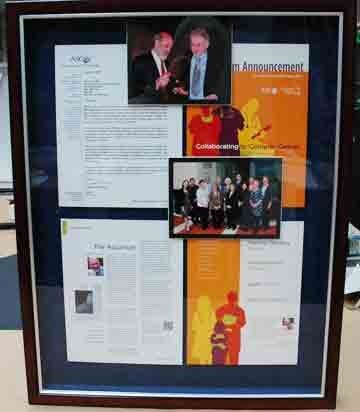 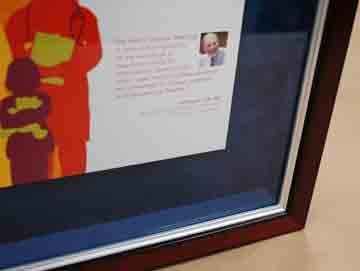 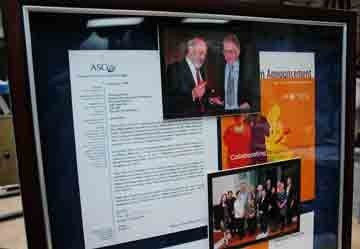 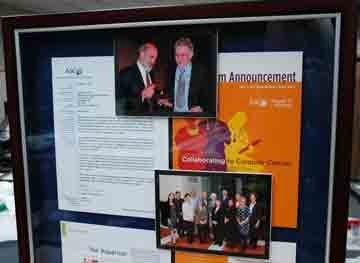 This year, the people at ASCO (American Society of Clinical Oncologists) asked us to design another shadowbox to present to the outgoing president of the association, but it needed to be smaller than last year's (see the ASCO 2011 shadowbox in this section), which had been 40 x 30. We did not have a gavel to include and the material being included was a little bit different in composition, so we were able to get the (glass) size down to 21 x 2. We used a Studio Moulding 242-125 Elan Cherry, which is very simple, elegant and deep enough for most shadowbox projects. We also added a silver fillet on the inside lip of the frame, to provide more drama between the Crescent 7581 blue linen mat and the cherry colored frame. It was just the right touch. The blue linen shadowbox is, incidentally, all one piece. We have figured out how to use our computerized mat cutter to create a fold-up shadowbox from mat board. We cut the drop-in shadowbox first, left it flat and unfolded, and then went back and cut the four mat openings in it to accomodate the letter, article and conference program front and back cover.

We used clear plexiglass to glaze it, as it would need to be carried back on a plane, checked as luggage or shipped back by UPS or FedEx. Plexi is way less fragile than glass when you know the presentation frame will have to travel.

The two photos were mounted on mat board platforms and then suspended above the 4 opening mat via foam board risers. Our client shipped the contents to us, originally, and then I arranged them in a layout I felt would work, photographing the layouts ( I did two) and then emailed them to our client at ASCO for approval. She called back about them, we tweaked them a little more and then put the box into production after final approval. While that method is a bit more time consuming, it still works fine when the client is across the country and cannot discuss the art in person. We can work that way, and we are grateful for the repeat business!

We received the final approval for the layout on May 9th and had it ready to go by May 29th as requested by the client.

Images shown by kind permission of S. Vishnu at ASCO.