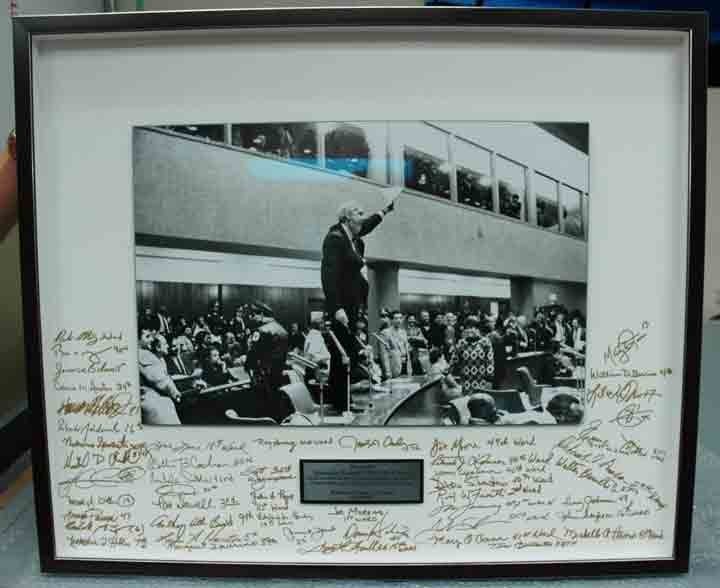 We got a call from the office of one of our regular framing clients, Chicago Alderman Edward Burke, regarding a colleague on the City Council who was retiring and to whom they wanted to give a framed retirement gift: Dick Mell. Alderman Mell had been a long time fixture in Chicago politics and had several distinctions, aside from a long and illustrious career: He is the father-in-law of the now-jailed Illinois governor Rod Blagojevich. That aside, the photograph shown in the shadowbox frame below is a famous newspaper photo showing him standing on his desk in the Chicago City Council during the Council Revolt against our first African-American, late mayor Harold Washington. As the late Mayor Richard J. Daley once said, "Politics Ain't Beanbag......" 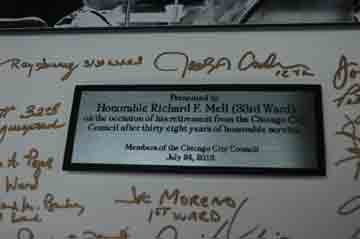 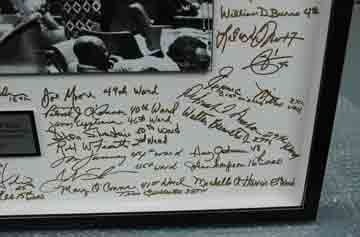 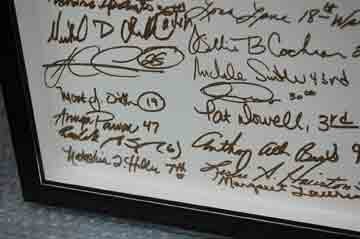 The frame is a Gemini G-3800 coffee cap with silver edges made to size 29 x 24. The shadowbox is Crescent 1613 Very White, signed in gold paint markers by the current Alderman of the Chicago City Council. The glass is Artglass Water White Anti-Reflective glass. We had our engraver create a silver plate with black engraving. We cut the mat first, let the client have it signed by all the aldermen and, then, did the framing. What we were puzzled by, though, was why everybody's signatures are clustered at the bottom of the mat and not dispersed all the way around? Must be something about Chicago politicians.......................................