Based in the heart of Chicago’s Loop since 1946, Flax Art & Frame started out in life as The Flax Co. It was just after the end of World War II when Donald and Alvin Flax, two veterans and brothers from Bayonne, New Jersey, came to Chicago after leaving the Army and Navy to start up a new business. With cousins in the art supply business on the east and west coast, they opted to come to the “third coast” and start up an art supply business of their own. 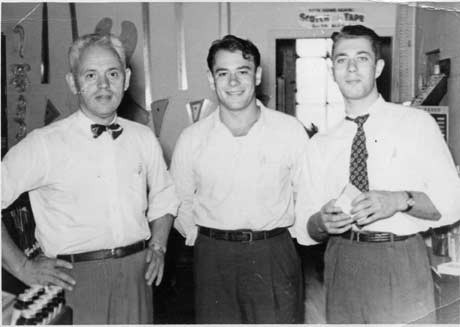 Left to right: Louis Flax, Alvin Flax and Donald Flax. Alvin was 21 or 22 years old in this photo and Don was 5 years older. Our grandfather, Louis, was 51 or 52 in this shot, probably at their first store at 163 N. Michigan Avenue.


Over 76 years later, Alvin’s son, Brian, owns and operates the company in Chicago, though it has changed a lot since those early days. When it came to art supplies, both commercial and fine art, they were always considered the “class act” in Chicago. In the late 1980’s, the desktop publishing revolution changed everything for them (and nearly every other art supplier, for that matter), rendering obsolete nearly all the commercial art supplies they sold. In 1988, Brian began the transformation of the company into what it is today: the only full-service picture framer in the downtown, Chicago Loop.

On July 1, 2007, Brian moved the company around the corner to a new store location at 32 E. Adams Street. The photo, at right, was the new location. It was taken not long after we had our new awning installed and the temporary window signs are still up.

On July 28th, 2016, Brian moved the company, again, back around the corner to our previous location at 220 S. Wabash, which had been totally renovated by a new building owner. Our space at 32 E. Adams fell prey to new building owners who were converting the 30 E. Adams building into "Micro-apartments" and wanted our store space for a coffee shop adjacent to the new lobby. Hence, our move.
The photo, below, is our current location 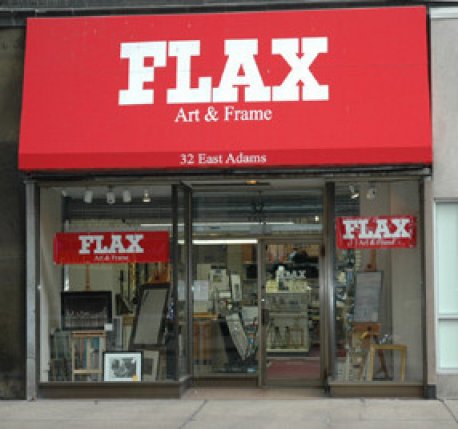 It is still gratifying to have customers and clients return to us, either very often or after a long absence. It is our completely professional approach to framing that keeps them coming back. When clients come in and are not sure how to approach a framing project, or whether or not we will touch it if they already have a frame or mat board, our reply is simply this:

"We'll do as little or as much as you require. We are totally devoted to finding the right solution for your framing project. We are here to help. Period."

Every prospective framing client is invited to bring their framing projects in for a free, no-obligation design consultation. We will come up with a number of different framing designs and price each one of them out for you. If you love what you see, problem solved. If you want to take it home and think about it or get a second opinion elsewhere, that's o.k. We're hoping to see you again!