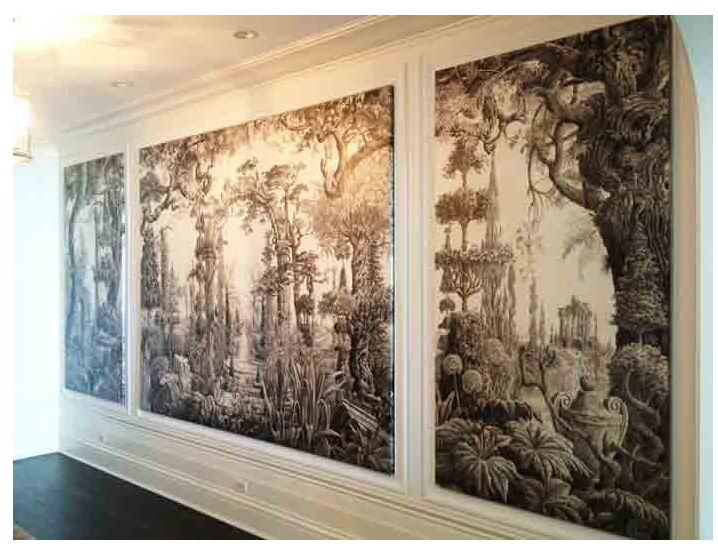 The above 3 canvases were part of a commission by Bernard Derroitte of Armstrong Fine Arts. Put together, they represent a complete set of drawings by the artist Francois Houtin. They were sold to the art dealer's client on the Chicago Gold Coast and needed to be stretched and installed. The only problem was that the canvases had to fit into pre-built niches in the wall, created by painted millwork molding and all 3 were different widths but all the same height. They had to fit snugly in each niche and, as such, would have to be inserted straight into each pocket. We could not use wire, D-rings, metal cleats or keyhole hangers. Short of gluing them to the wall or putting long screws through the face of each  canvas, we tried to figure out how to accomplish this. We finally arrived at an elegant solution: Velcro. 3M has a product called Dual-Loc, which is a heavy-duty, industrial-strength velcro that consists of two faces that both have heavy hook-like elements (as opposed to standard Velcro, which consists of a hook element and loop fabric element). She used the pressure sensitive backing of the Velcro to stick it onto the back of the stretchers and added heavy duty staples to make sure it never let go. She put a corresponding layer of Velcro on the perimeter of each wall niche (she had already made a site visit to get precise measurements for the canvases).

The main canvas, in the middle, was 92 1/4" wide 73 1/8" tall. The canvas on the left (shown below right) was 38 7/8 x 73 1/8. The far right canvas was 38 7/8" x 73 1/4". While each niche was a different size, they were all pretty square. While not shown the back of the central canvas panel (the largest one) has corner braces and a cross brace on the back to keep it square while stretching. All canvases were stretched on heavy duty stretcher. One of the difficulties was that the canvases needed to be taught, but not so taut that the tissue drawings adhered to the canvases would start to tear. Dana has had a lot of experience working with stretching canvas-backed drawings before, such as those of the late artist Montana Morrison. After we would stretch them for her, Montana would take them back to her studio and paint the edges of the "gallery wrap" canvas.

Dana did a great job and everyone was thrilled!

Images shown by kind permission of B. Derroitte and D. Cavanagh 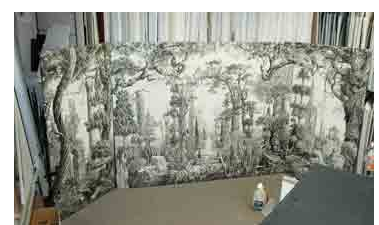 After stretching the three, we stood them up next to each other to see what the whole panorama looked like. It was all, originally, one large drawing that had to be sliced into three parts to fit the 3 wall niches. 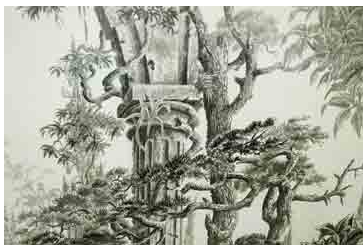 This is a closeup detail of one segment of the illustration. It was very detailed and almost photo-realistic. The photo next to this one shows the back of the canvas after stretching, that appears on the far left of the composition. 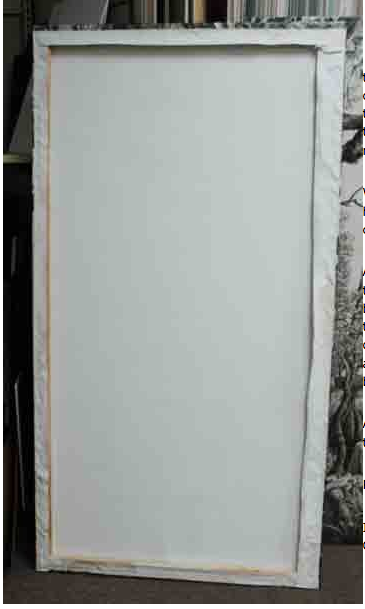