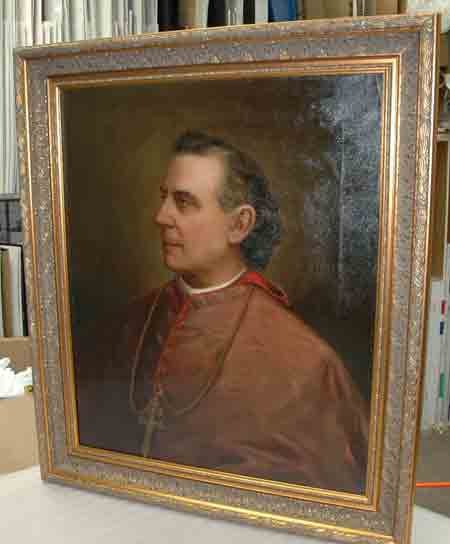 We do a lot of framing for our neighbor, down the street, DePaul University. One of our many clients, there, brought in an oil painting from the 19th century of the founder of DePaul University. It was in a very baroque, 19th century frame that needed replacement. Upon examination, we discovered that there was no extra canvas on the sides of the stretcher beyond the 1" used to tack the canvas down for stretching. Our shop manager, Dana, had gotten some training in a process called "striplining" that allows you to attach additional fabric to the edge of a canvas to facilitate re-stretching.She used strips of Organdy (sheers) and BEVA (a hot-melt adhesive used in conservation work) to attach strips by means of a precisely controlled tacking iron . She added new fabric to the edges, built a new stretcher for the canvas (the old one was just flat boards and had left a bit of a line on the face of the painting) and built a new frame (Gemini 425 Hudson river style). It also got Museum Glass with special spacers to keep the glass off the painting and still protect it from light damage and incidental contact. Here are some photos of the process: 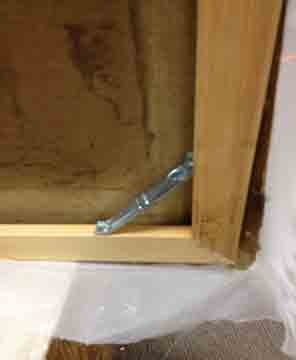 Note that we have added an adjustable metal corner brace on the stretchers to help keep it square over time. You may be able to make out the line forming on the face of the canvas from the stretcher bars, which are flat and do not have a raised outer lip to create an air space under the canvas. Over time, the canvas will start to show the inside edge of the stretcher if it can come in contact with it. This is not a proper way to stretch a canvas. It would have required a major amount of conservation to remove the lines, at this point in time. We lined the inside of the frame rabbet with foil backed, acid-free conservation tape and Volara foam tape on the underside of the lip to isolate the canvas from the acid-bearing wood. Dana, also, sealed the wood stretchers with a varnish to further isolate the wood from the art. The only thing we might have done differently, had we the time and budget, would be to stretch the canvas with copper tacks instead of stainless staples. 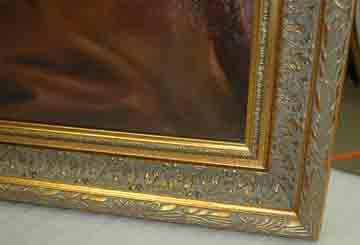 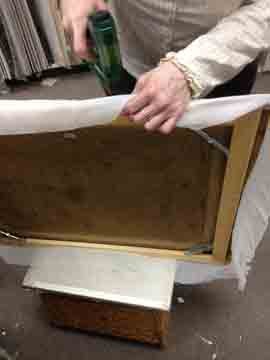 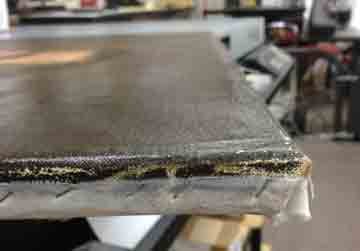 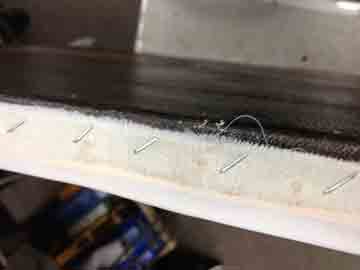