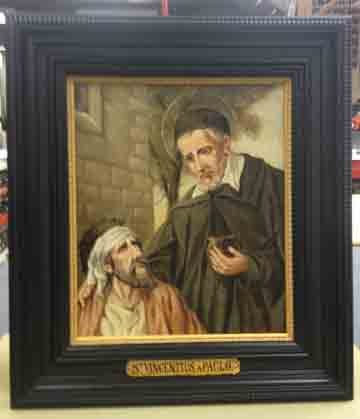 Our client, an administrator at DePaul and a member of the Clergy, has a passion for St. Vincent and has been bringing back original works of art from Europe that deal with the late Saint. The canvas, depicted here, is an 18th century oil on linen that had been conserved before it was brought to us for framing. We selected a black Dutch Ripple design by AMPF #1421, and lined the frame's lip  with a  classic gold "slip" or  "fillet" (Larson-Juhl 155CG). The fillet has the same "rippled" texture as the frame. This gold fillet helps to break up the look of a dark frame and a dark painting and gives added emphasis to the framed canvas. We transfered the brass name plate from the old frame to the new. We found another name on the back of it so it had, apparently, been re-used either by the artist or the framer. The frame size (inside) is 12 1/2" x 15 1/8". The conservator of the painting had screwed, onto the back of the canvas stretchers, a piece of white foam board. It still had corner areas cut out on the foam board, since there was a brace at each corner of the canvas stretcher. We removed the foam board and used a piece of inert Coroplast (corrugated polyethelyene) and covered the entire back to protect the back of the canvas from dust, moisture and invasive insects. The canvas was slightly deeper than the rabbet depth of the frame, so we used metal offsets to hold the Coroplast and canvas in place. Also, the inside of the frame is covered in foil-backed barrier tape to prevent acid-migration from the wood frame into the canvas and, as well, we used Volara (a sort of foam tape) that prevents the painting from sticking to the underside of the lip of the frame. 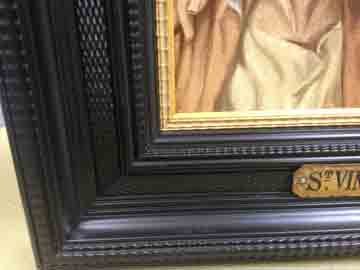 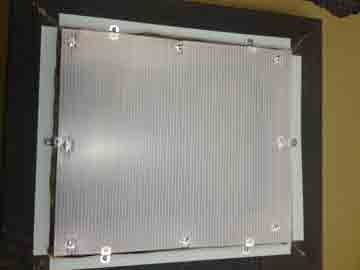 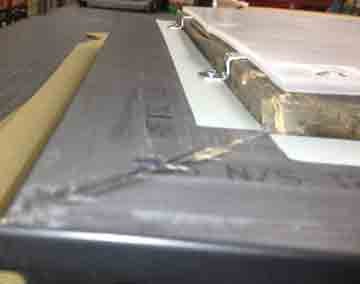 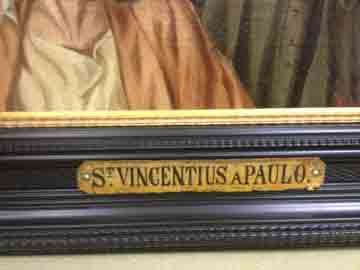