One of our clients in the president's office at DePaul University here in the Chicago Loop approached us with a frame project that would normally prompt an answer like, "Sure, no problem." When Dana, our shop manager, went over to survey what needed doing, she came back with the wheels turning in her head, trying to figure out how we were going to get this done. "Sure, no problem" was actually a bit more problematic after we got a good look at the project.

The project entailed building wooden frames for two photo montages printed on stretched canvases that were 36" tall and ran 15 feet and 21 feet long. Apparently, the canvas stretchers had been assembled on-site in sections and the canvas had been stretched on-site as well. We would not have quite that luxury, as this was on an upper floor in an office building downtown.

We ended up using a Studio 3125 Madera Cherry moulding that was 1" wide on the face and 2 1/8" tall, which Dana ripped down to a shorter height on our table saw before constructing the frames. The 15-footer was built in 2 "L"-shaped sections that she was able to join on-site. The 21-footer, however, was a different matter entirely. 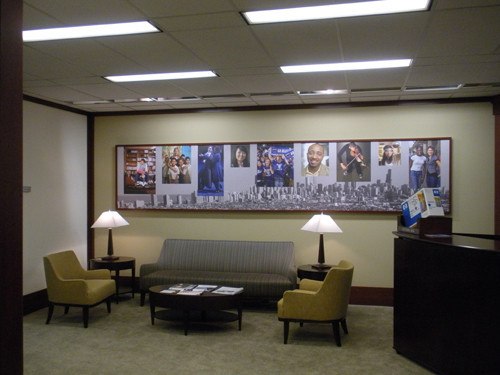 The 21-footer had to be built with the long sides spliced in 2 places. Dana built two large "U" shaped frame sections and joined them with an extender mitered at both ends to create a nearly-invisible lap joint. It was a brilliant bit of engineering that worked out really well. The problem was making the sections small enough to fit the freight elevator, but large enough to minimize the number of joints she would have to attach.

All that notwithstanding, she and her helper Keith Dukavicius got the job done and it turned out just great!

Images by kind permission of B. Roman of DePaul

Check out some of the details below: 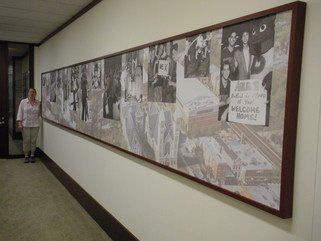 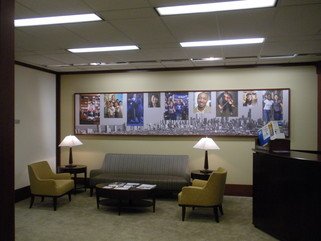 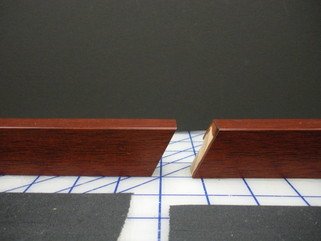 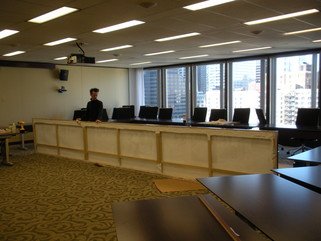 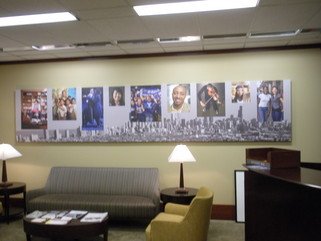 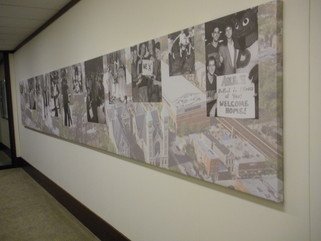