In framing lingo, when you frame something so that it can be viewed from the front and back of the frame, it is called framing in recto verso. Dana, our shop manager, was asked by her clients to show both sides of an original 14th c. vellum parchment book page. She created this frame job with an Engelsen 2588 Antique Gold carved frame that has a glass size of 7 3/8 x 10 1/2". The mat used was Artique 4823 Acorn (that picked up on highlight colors in the frame and art) and the glass, on both sides, is Artglass U/V WaterWhite anti-reflective (museum) glass. The glass on the back is held in place by means of a glued-in black acrylic spacer. The art is suspended between two identical mats. No tape or ahdesives were used on the vellum. It is held in place either by means of polypropylene photo corners or mylar edge strips that overlap the 4 sides but are hidden by the matting. The back of the frame has been covered with black paper as well to cosmeticize the unfinished nature of the frame's back face. Check it out: 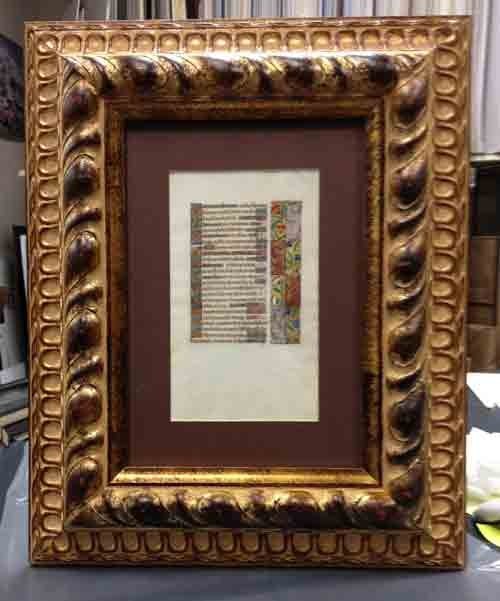 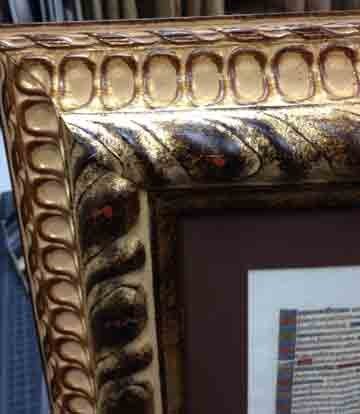 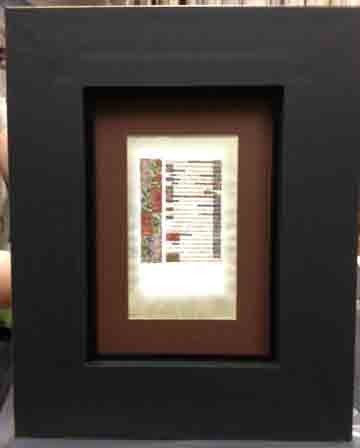 The photos were taken prior to adding the hanging hardware, which would have been two D-Ring hangers, instead of wire that would run across the back face of the frame and obscure the "verso" side's viewing. A dramatic frame was chosen to give greater emphasis or importance to the framed object. A small frame on a small item = small impact. Also, the mat borders were large enough to prevent the perception of the frame blending with the vellum. Size matters!